Timing is Everything for Snap Grackle Pop!

Snap Grackle Pop (Linda Colucci, Karenna Awtry and Adara Ricciuti) started the first day of their Birdathon down one teammate.  Karenna and Linda felt the pressure to get a good start especially since this was the team’s first Birdathon ever.

We started at Algonkian Park and right from the parking lot we heard and saw numerous birds.  Walking along the path beside the Potomac River, we were fortunate enough to spot birds in the trees overhead, the grass near the pavilion and the river alongside us.  The common backyard birds we identified were a good warmup.  With the help of the Merlin Bird ID app, we used the sound ID feature to figure out the less obvious birds we were hearing, so we knew what to look for.  We were so excited to identify several warblers such as the Yellow Warbler, the Common Yellowthroat and the Palm Warbler.

Sometimes timing is everything.  While looking across the Potomac to search for waterfowl, a Bald Eagle flew by.  Score!  Another time, a random glance at the water revealed a party of four diving ducks.  We had no clue what they were (waterfowl is not one of our strengths), but we followed the premise of photograph now, identify later. It turns out they were Red-breasted Mergansers.  Score!  A few hours later, we came upon another duck with a trail of ducklings in tow.  Kodak moment now, identify later.  This ID required consultation with Joe Coleman and his friend Gerry Hawkins (an eBird reviewer).  Their verdict: Common Merganser.  According to Hawkins, “We get Common Mergansers on the Potomac most years, but this is the first time with ducklings.”  Luck was on our side.

By the time we finished at Algonkian, our stomachs were growling and our necks were sore from looking up into the treetops.  We drove to Broadlands Wetlands and had a picnic lunch under the shade of a tree and were serenaded by a mockingbird.  Unfortunately, the wetlands were pretty dry.  Still, we added a few more species to our list. 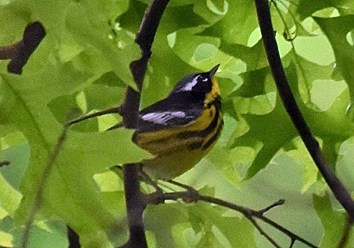 We ended the day with a walk along the wooded trail behind Karenna’s house in Ashburn Farm where we saw a Barred Owl, which was Linda’s first owl sighting in the wild!  We also found nests of three different species: a Red-shouldered Hawk, a Northern Cardinal and a Blue-gray Gnatcatcher.

We counted a total of 51 species that day.  We were thrilled with our results and had so much fun.  We couldn’t wait for day two and to have Adara join us.

On the second day of our Birdathon, the whole team started bright and early at Bles Park.  The weather forecast showed severe thunderstorms and a possible tornado in the afternoon, so the heat was on to cover a lot of ground before then.  The other challenge was finding birds that weren’t already on our list.  Having a third set of eyes and ears proved to be very helpful.   One of the first birds we identified was a Yellow-billed Cuckoo—a first for Karenna and Linda!  In the sky, flocks of Cedar Waxwings kept passing by, their high-pitched chatter ringing in our ears. 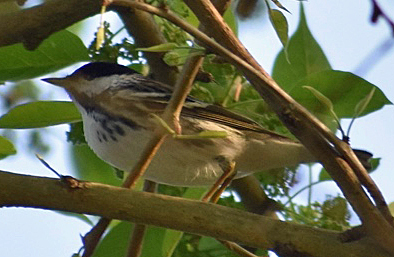 At the pond we identified Spotted Sandpipers and a Wood Duck. We added a few more birds to our list while walking through the woods and along the river before the rain started.  We took a break for a few hours while the storm passed through and then convened at Karenna’s house once the sun came out. Her neighbor’s oak tree has hosted a Mississippi Kites’ nest for several years. The breeding pair was curious about us three humans standing in the road looking in the direction of their nest. They checked us out by flying low overhead, giving us a good look. Next we headed to the Broadlands Wetlands. Not much going on there, so we drove to Algonkian Park. The windy conditions and heavily leaved trees made finding, identifying and photographing birds very tricky. We persevered and added a few more species to our list including a Magnolia Warbler and a Black Poll Warbler.

Our Birdathon experience closed with the flight call of a Pileated Woodpecker for a grand total of 70 bird species. Our efforts raised just under $850 for Loudoun Wildlife.