If you ever have an opportunity to see an eagle’s nest while birding, do not be surprised by how large they can be! Typically, an average eagle’s nest spans five to six feet across the top and two to four feet deep. However, some eagle nests have been known to reach as deep as 22 feet. According to the Guinness Book of World Records, the largest bird nest was built by a pair of Bald Eagles near St. Petersburg, Florida. It measured 2.9 meters (9 feet, 6 inches) wide and 6 meters (20 feet) deep, and weighed an estimated two tons. Eagles build their nests in a very tall, strong tree with a branched crotch toward the top that is strong and resilient enough to carry the weight of the nest, two large adult eagles and their eaglets. In addition, they nest where there is a clearing to the sky to make it easy to fly from and to the nest. They also build their nests close to water, where they can fish and forage for diverse sources of food. The exterior walls of the nests are well built and stacked up into a cone using strong sticks to hold the weight. The eagles typically pick up these sticks or simply break them off trees. The inside of the nest is typically lined with different types of soft materials such as moss, grass, seaweed or sod.

Considering their large size and ability to ward off predators, very few animals try to prey on Bald Eagles. Eagles are one of the largest and strongest of all raptors and  one can easily assume that they can go unchallenged in the air, almost earning the reputation of an apex predator. However, Bald Eagles can be challenged by Peregrine Falcons. For example, if a Bald Eagle were to fly close to a Peregrine Falcon’s nest, it would quickly find that it has met its match. On the ground, Bald Eagles can be attacked by bobcats, cougars, coyotes, wolverines, fishers, pine martens, and badgers. However, even on the ground, Bald Eagles have very few attackers that can prey on them easily or successfully because of their large size and predatory skills. 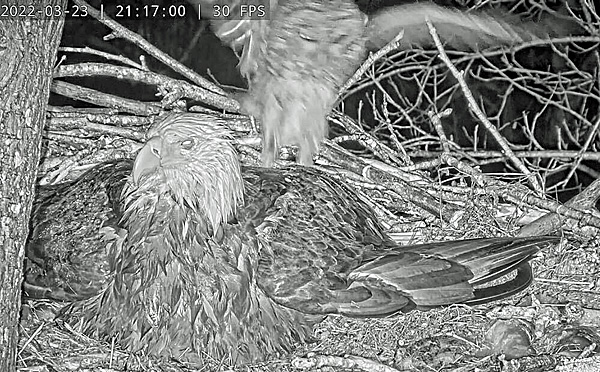 Bald Eagle nests can be visited sometimes by species that would not attempt to prey on the eggs. Surprisingly, mice do visit Bald Eagle nests but do not attempt to harm the eggs. Research in North America shows that there is very limited predation by mice in the nests of smaller birds, and none in the nests of birds of prey or larger birds. Why do mice visit an eagle’s nest? They are known to nest within the eagle nest and feast on the nest leftovers. Racoons are also known to visit Bald Eagle nests looking for food and feasting on nest leftovers.

Parents take turns watching over their nest to ward off predators. Bald Eagles vigorously defend the nests and are dedicated to ensuring the safety of their eggs when they perceive a threat to their nest or to their offspring. Footage caught at the Hanover, PA, Bald Eagles Nest cam on March 19, 2018, shows a Bald Eagle trying to prey on the eggs of another Bald Eagle. The parents take turns to watch and monitor the nest and are quick to fight back predators who may try to take advantage of their nest, eggs or offspring.