May 18, 2022 Posted by Sheila Ferguson Birdathon, Wildlife News No Comments

The Fully-palmated Birders (FPB, for short) were at it again on Saturday, April 30 when we began our Birdathon. The team is comprised of Christine Boeckel, Michael Myers, Michael Sciortino and Mike Scott. Overall, FPB recorded 120 species after visiting 10 different locations throughout the county. As we did last year, the team covered some serious ground hiking close to 19 miles in search of birds over a two-day period. 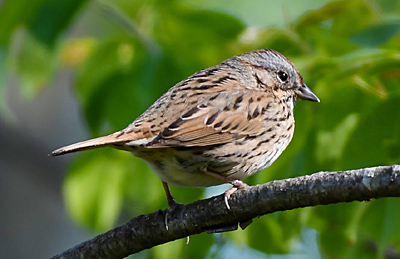 The team started at 5:45 am at the Algonkian Regional Park boat ramp for our first location of the day. Algonkian is always a great place to jump start a Birdathon checklist, and we did so with 74 species recorded. The highlight was the Lincoln’s Sparrow that popped up on the trail in the vicinity of the driving range when we neared the completion of our walk. Michael Myers was able to get excellent photos of this rare species which we posted to our eBird checklist. Baltimore and Orchard Orioles were vocal along the trail, and we were treated to great looks of our first-of-season Ruby-throated Hummingbird in the honeysuckle shrubs to the right of the driving range. Then the golf balls started flying so we needed to skedaddle from this dangerous area. We spent some time at the mouth of Sugarland Run where 15 Common Mergansers ducklings followed closely behind their mother with one on her back hitching a ride.

The team moved on to the area north of the boat ramp heading towards the water park, and we were able to see, and get photos of, our only Great Horned Owl of the weekend. This was a spectacular sighting, and it stayed awhile for us to get looks from various angles as well as get some spectacular photos. 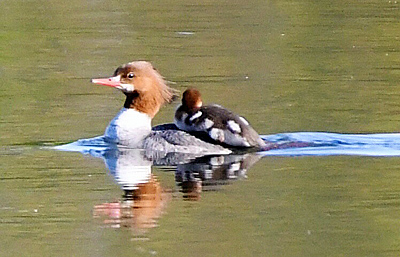 Common Merganser with a duckling on her back.
Photo by Michael Myers

Our next stop was at Bles Park where we recorded a total of 58 species.  A peek at the pond for shore and wading birds was quiet except for numerous families of Wood Ducks. We counted two families made up of 21 individuals, and we spotted two Pie-billed Grebes working the far side of the pond. In addition, we spotted a lone Northern Waterthrush on the far side of the pond working the shoreline, and it took a little time to confirm this sighting. We recorded our only Chestnut-sided Warbler with the help of the Merlin sound recognition app and got visual verification as well as a few photos. We were surprised how effective the use of that technology was in the sighting of this species. After a quick lunch provided by Chrissy and her husband, Eric, FPB was off headed toward the Dulles South area.

Next up was Broad Run Stream Park at the junction of the Loudoun County Parkway and Evergreen Mills Road in the Dulles South area. This location has become quite the birding hotspot along Broad Run along with the numerous ponds on the property. We recorded 61 species over a three-hour period that covered 3.6 miles. We were fortunate to have had the benefit of hindsight since there was a bird walk earlier in the day lead by Bruce Hill. That walk was well-attended by excellent and experienced birders and was well-documented to our advantage. We had good views and excellent photo opportunities of more Red-headed Woodpeckers (we saw our first at Algonkian) and an appearance of both a Rose-breasted and a Blue Grosbeak in the same tree. We were not able to locate  the Worm-eating nor Canada Warblers that the morning group reported. There was a lone Hooded Merganser duckling on the large pond with no siblings or parent in sight. We were a little concerned over its fate, but it was seen a week later so that is hopeful. We were able to pick up three new species at Broad Run. 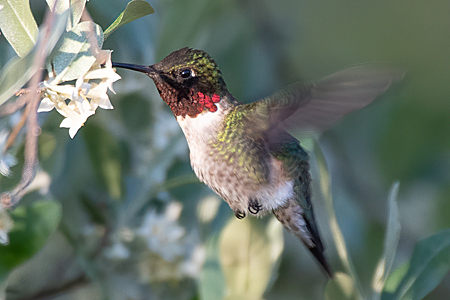 Our final stop for Saturday was at Middlesex Drive Pond on the eastern border of Loudoun County with Fairfax County. The pond was quiet, but the domestic Swan Geese that have taken up residence there were interested in us. They flocked to us as if we were there to feed them. We recorded 26 species at the pond, and we were able to score a Greater Yellowlegs, our only sighting of this shorebird species during our two-day event. As was the case last year, the warbler activity at the pond was minimal (except for additional Yellow-rumped Warblers that were everywhere in the county over this weekend). We ended the day with pasta and meatballs while we gathered around Michael Myers’ pickup. Thankfully, the Swan Geese were not interested in Italian food, and they left us alone while we ate.

We started Sunday at the Blue Ridge Center for Environmental Stewardship (BRCES) at 5:45 a.m. We had a feeling that BRCES was going to pay birding dividends and it certainly did as we recorded 75 species with 17 of these found only at this location. We were happy that a lone Yellow-bellied Sapsucker stuck around for the weekend to get on our list before it headed north for the summer. The 75 species included the always reliable Louisiana Waterthrush, a Kentucky Warbler, a Magnolia Warbler as well as Black-throated Blue (and Green) Warblers. We did record our lone Acadian Flycatcher on the Farmstead Loop which was a first of  season for many of the team. We saw a first-of-season Scarlet Tanager along the Farmstead Loop as well. At Arnold Lane we saw American Kestrels on the wires and saw one enter a nest cavity in the wooded pylon. We heard Eastern Meadowlarks calling from the field as expected at this location. On the way back into the woods we heard our only Golden-crowned Kinglet of the weekend. Thrushes were abundant as we recorded our only Wood Thrushes, more Hermit Thrushes and our only Veery. The team spent over six hours at BRCES and covered six miles.

To mirror our plans from last year, we decided to make a quick strike at trying to find Bobolinks as we made our way back towards Leesburg. Last year we struck out on our visit to Ash George Lane near Lovettsville, but this year we knew exactly where to look: Clover Hill Road on the outskirts of Waterford. As we arrived the skies threatened, and we raced to beat the coming rain. It was apparent that we would not be able to walk Clover Hill Road without getting utterly soaked, so we jumped in the back of Michael Myers’ pickup and drove to get our sighting as quickly as possible. Unfortunately, we were still pelted with massive, cold rain drops along the way, but we did spot numerous Bobolinks in the field along with Eastern Meadowlarks and Red-winged Blackbirds. In spite of only getting three species, we were as pleased as we were wet. 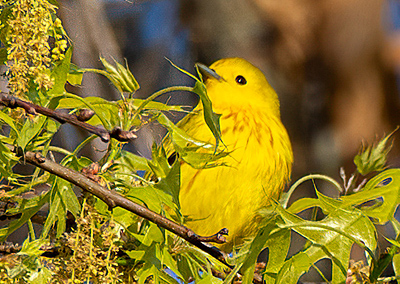 Our next location was to the Dulles Greenway Wetlands Mitigation Project, which allowed us some time to dry off on the ride over. The rain started again, and we were forced to don our foul weather gear for the walk to the Goose Creek and back. To compound the rain, the ticks were out in force at the notoriously tick-infested Wetlands. We still recorded 49 species over an hour and a half, but we were not able to record any new species. The ponds were quiet with waterfowl activity, and this location was literally a wash out for the team.

We made our way back to the Leesburg area with a quick stop at Meadowbrook Farm Ponds, and we recorded 19 species including two Lesser Yellowlegs. As our Sunday was winding down, we made a quick stop around the parking area and field of Rust Nature Sanctuary and recorded a quick 30 species but, alas, we added nothing new to our list. To our surprise, we had not seen any Cedar Waxwings over the two days, but we knew that they were out there.

The team’s final stop of the weekend was at Morven Park where we recorded 37 species in just over 30 minutes. Most notably, those species did include a batch of six Cedar Waxwings to round out our list and complete the spectacular but exhausting weekend of birding.

All the driving and hiking was well worth the 120 species that we recorded over the weekend. We were excited that this was an increase of five species from our official Birdathon tally in 2021 and a serious contender for lead in 2022. It was a pleasure to raise money and awareness for Loudoun Wildlife during this worthwhile event. 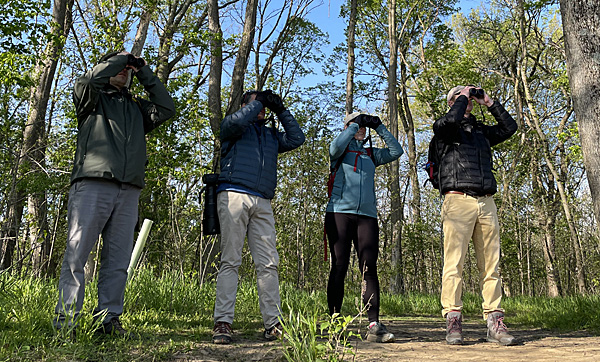