Eaglet Milestones for Week Nine and Beyond

As the Bald Eagle approaches week nine and beyond, most of the skills needed to take the first flight off of the nest have been learned.  Feathers are still growing and play an important part in the first branching and first flight.  During this time, the eaglet is well able to fly, but the landings can be awkward and hard.  Sometimes the eaglet has a “fludge” instead of a fledge, leaving the nest before it is quite ready, and may end up in a lower tree, or even on the ground where the parent will care for it until it can return to the nest. 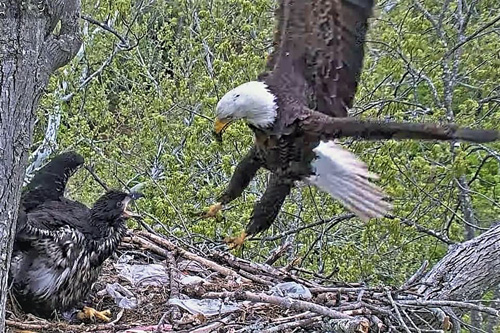