Conducting a benthic macroinvertebrate survey is a bit like treasure hunting — you never know what you’ll find in the net. Loudoun Wildlife Stream Team volunteers netted a Northern Two-Lined Salamander larvae at a recent survey of a tributary of Limestone Branch at the JK Black Oak Wildlife Sanctuary in Lucketts. Although not counted in the survey, volunteers enjoyed observing the salamander for a short time before releasing it back into the stream. 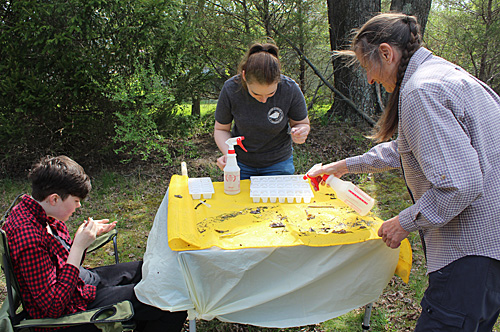 Loudoun Wildlife maintains two stream monitoring locations at JK Black Oak at the northern and southern ends of the property about a quarter mile apart. Despite this short distance between the sites, they received drastically different health scores.

The upstream site received a score of 10 out of 12, indicating acceptable ecological conditions. Over half of the 279 macros collected were pollution sensitive beetles, including waterpennies and both larval and adult riffle beetles. Smaller numbers of caddisflies, midges, stoneflies, and worms were also present in the sample.

The downstream site received a score of 5 out of 12, indicating unacceptable ecological conditions.  The sample of 317 macros at this site consisted almost entirely of pollution-tolerant midges, with a few pollution-tolerant worms and leeches.

Both of these sites are also part of Loudoun Wildlife’s Clean Drinking Water for Lucketts project funded by the Tides Foundation, on the recommendation of the Google Data Centers Grant Funds. You can find more information about both benthic and E. coli data from these sites here.