What Happens After the Hatch?

After approximately 35-40 days, the eagle eggs go through a process of developing a pip (the first break in the eggshell by the hatching bird), then 24 to 48 hours later they will hatch.  It is considered a full hatch by most eagle cam teams when the hatchling is totally free from the shell. 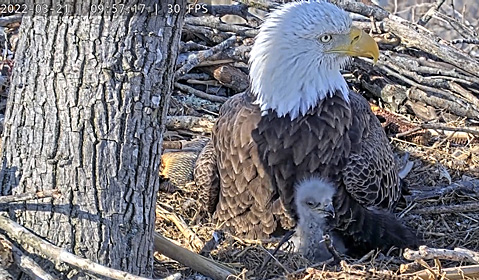 The new hatchling has pink skin and is damp from the fluids in the egg, and is covered in very fine light covered natal down (which usually takes several hours under the parent to dry out and fluff up).  The hatchling is totally helpless and is completely dependent on the parent, called “semi-atrical.”  They weigh approximately 3 ounces at birth.  Their eyes are open, but vision is very poor, seeing only shadows the first week or so.  This leads to seeing them bob their heads about to see, attempting to snatch at the parents’ beaks with food, but often missing due to the poor vision.  Small dark holes can be seen on each side of the head,  which are the ears.  The early period is the only time the ears are visible as they will eventually be covered by down and feathers.  They are weak, have very poor head control, and are very tired from the hard process of getting out of the shell.  Normally it takes several hours of rest and time for the down to dry before becoming the fluffy cute hatchling often called a “bobblehead” by eagle followers.  Determining the gender of the hatchling is not possible without DNA testing.  Guesses can be made according to size when there is more than one eaglet, and some organizations use measurements of the beak, and hallux (the backward- pointing toe) to attempt to determine gender.

It is not unusual for an eagle hatchling to not be given food for the first 24 or more hours.  During the hatching process, they absorbed the egg yolk which provides initial nutrients.  At some point they will sit up and chirp at the parent and be offered food.  The parent will not force food on the hatchling but will offer small bites at a time.  In the beginning, they are offered very small frequent meals that may consist of only a bite or two.  The parent rips off part of the food being used and uses its beak to offer the bite to the hatchling into its beak.  You may see the hatchling snap or snatch at the food as it nears its beak due to the poor vision.  It is amazing to see the size of bites a very young hatchling can manage.

The hatchling, or eaglet as it may be called, will gain approximately 1/2 to 1 pound per week for the first nine to 10 weeks of life. Females are typically larger than males, even in the eaglets. Fish is the preferred food for Bald Eagles, but they are scavengers  and opportunistic eaters, and will take whatever food is available.  We may see fish, waterfowl (such as ducks, coots and geese), small mammals (squirrels, rabbits, moles and rats), reptiles(snakes and turtles), and carrion or roadkill found on the side of the land, water or highway. They may even take food from trash receptacles or dumps if one is nearby.  This sometimes leads to trash being brought into the nest with the discarded food.

When the hatchling is fed, the food goes into an area near the neck but above the stomach called the crop.  It can often be seen bulging out and can seem quite large.  This allows eagles to store food to use later.  You may see the eaglet appear to yawn, which is a maneuver they use to move food from the crop down into the stomach, which is quite small.

The hatchling is immobile at hatch.  Initially the hatchling is contained within the nest bowl that the eggs were nestled in, this continues to provide the warmth that is needed as the hatchling cannot regulate its own temperature for about two weeks until the thermal down grows in.  It is necessary for the hatchling to have constant brooding from the parents, being exposed only minutes at a time for feeding.  The brooding provides protection from the sun, temperature and weather.  An eaglet that does not receive proper brooding, or who manages to get outside the nest bowl, could end up not surviving. This has happened at some nests observed by nest cams.

It is not until later, when they start to develop and grow, that they are able to start to move around the nest.  Their initial movements are awkward, resting on their tarsi (leg bones) and using the ends of their wings to assist in movement

By about two weeks, they have better head control and feeding becomes much quicker and smoother.  At about three weeks, they are approximately 1 foot tall, and their feet and beaks are nearly adult size.