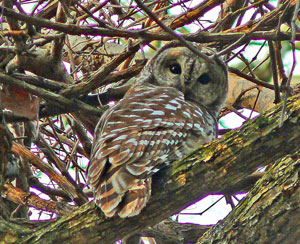 On a cold but sunny morning on February 20, a group of 20 birders led by Bryan Henson and Allison Gallo visited Bles Park.  The highlights of the walk were easy to determine.  First, we had a Barred Owl that was sitting out in the open and allowed good looks in the bright sunlight before moving on.  Second, we had a Northern Harrier flying low over Selden Island.  Throughout the park, the birds were out and about.  A flock of sparrows foraged on the edge of the marsh.  A Red-shouldered hawk perched on a tree along Broad Run.  Hooded Mergansers and a Common Merganser swam in Broad Run.  Lovely Eastern Bluebirds, Brown Creepers and Yellow-rumped Warblers maneuvered at eye level as we approached the Potomac.  Wood Ducks, Mallards and a Red-tailed Hawk flew over at different times during the walk.  All told, a very pleasant walk with 42 species found despite a few wintering species misses.