Fall Weather Brings Out the Warblers at the Blue Ridge Center

Twelve birders joined Michael Sciortino and Mary Ann Good for the September 25 bird walk at the Blue Ridge Center for Environmental Stewardship. We were excited as fall had finally arrived overnight just in time for our early morning event. The temperature started out in the low 60s and steadily climbed into the 70s. The birds were excited as well as the group recorded 55 species during the nearly four hour walk. 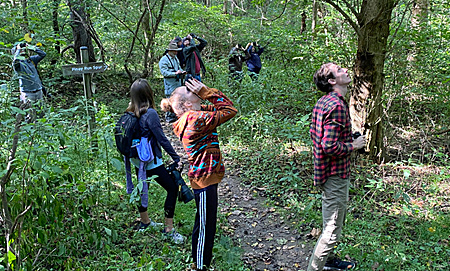 Bird watchers enthralled in the presence of warblers.
Photo by Michael Sciortino

Interestingly, the group barely made it out of the parking lot as the birds were active in the hedges and trees that surrounded our cars. We spent close to an hour near the parking lot and recorded 30 species without traveling anywhere. The hedgerow was in direct sun, and we quickly had good looks of a Black-throated Green Warbler, a Magnolia Warbler, a Blackburnian Warbler, and a male Rose-breasted Grosbeak in full sunlight. The three photographers on the walk enjoyed the excellent morning light and were able to get some great images. We also spotted a Nashville Warbler and a few sparrows in the grass. The sparrows included at least one Lincoln’s Sparrow which was a first for many of us. An American Kestrel provided a nice aerial demonstration as it flew overhead, circled the group, and then disappeared over the visitor center. We spotted our first of season Ruby-crowned Kinglet in the canopy above the trail that borders Wortman Pond.

After nearly an hour spent in the parking area, we continued our journey to the Farmstead Loop and Piney Run area to look for warblers. The group heard and saw five woodpecker species including numerous Red-bellied, Downy, Hairy, and Pileated Woodpeckers as well as a handful of Northern Flickers. It was just too early for Yellow-bellied Sapsuckers, but we were hopeful that we might get a first of season. The bridge over Piney Run was a disappointment as there was no activity. We continued along on Farmstead Loop and ran into a massive flock of Common Grackles mixed in with Rusty Blackbirds deep in the woods. The flock streamed past us in great numbers as we made our way towards the historic cabins.

The warblers kept on coming as we climbed the trail out of the Piney Run area with good looks of another Blackburnian Warbler, a Blackpoll Warbler, and two Black and White Warblers. Demory Field provided a second sighting of a female Scarlet Tanager, a few Indigo Buntings, and Eastern Wood-Pewees. Overall, the Gray Catbirds were out in numbers, but the day was won by and estimated 40 Cedar Waxwings that perched atop trees of heaven and flew by in large groups.

A complete list of the birds observed during the walk is available on eBird at: https://ebird.org/checklist/S95156541.