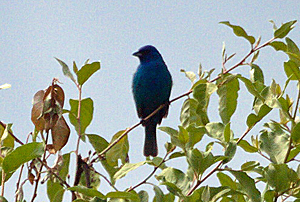 The 14 people on the June 26  bird walk at the Blue Ridge Center for Environmental Stewardship found 49 species on the Farmstead Loop and the fields that border it. The fields appeared to have so many Indigo Buntings that some had to move deep into the forest along Piney Run. There were also several very vocal Yellow-breasted Chats and Common Yellowthroats out in the fields.

While we got good looks at both the Buntings and Yellowthroats, the Chats teased us with their constant chatter. Other highlights included a Worm-eating Warbler, a Yellow-throated Vireo and singing Scarlet Tanagers in the forest along with numerous Acadian Flycatchers, Blue-gray Gnatcatchers and Red-eyed Vireos. The group also found Yellow-billed Cuckoos, a Green Heron and a rather sorry-looking molting juvenile Red-shouldered Hawk.  The walk was led by Joe Coleman and Mary Ann Good with assistance from Scott Harris and Robert Pasieka.

For a complete list of the birds observed see the list below on view online on eBird. 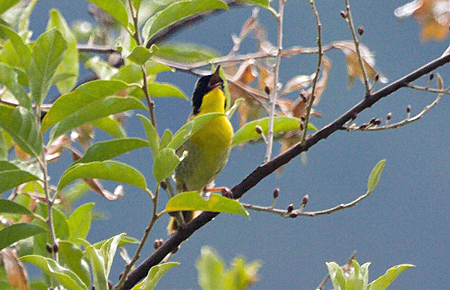