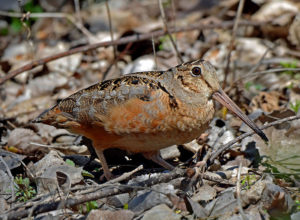 Wednesday, March 3 was a lovely evening for the nine participants who went on the Woodcock Outing with Emily Southgate at the Institute Farm  in Aldie.  The outing started with a brief description of the Institute Farm and its history as one of the nation’s first agricultural colleges in the 1850s. The main building is on both the National and the State Registers of Historic Sites. The property is now the home of the National Beagle Club, which has been holding field trials there for over a century.

The property is managed for rabbits, which turns out to be managing for woodcocks as well. Both need a mix of open spaces and brush. Poor drainage also means that it is quite wet, which the woodcocks like.

The group saw and heard lots of woodcocks. Many were “peenting” in the distance as well as close by. Some on the path near us put on a good show. We saw many landing and, as usual, could follow those who were flying up until we lost them in the sky. It is always a magical time, just being out in the dark and listening to the sounds of nature.

What was probably a fox startled one of us, rustling the brush much more loudly than a bird would. In addition to woodcocks, several sandhill cranes flying overhead was seen by one of the group and heard by most of us.