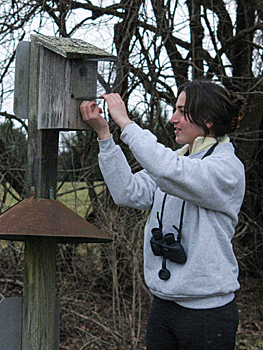 While collecting data for the 2020 Loudoun Wildlife Bluebird Monitoring program, we were dismayed to discover that the nesting boxes at Franklin Park in Purcellville had not been monitored last year. As luck would have it, we received an inquiry through Loudoun Wildlife’s website from Annaliese Meistrich, a Loudoun Valley High School senior, expressing interest in the trail.

Annaliese is passionate about ornithology, photography, habitat conservation, and solutions to use of land and water. She has many extracurricular activities, including serving as an emergency medical technician for the Purcellville Volunteer Rescue Squad. But Annaliese wanted to share her passion for birds while educating others, so she founded the Loudoun Valley Birding and Ornithology Club, the school’s first birding club. Annaliese feels “birding is much more fun with a group” and that monitoring the trail would be a perfect activity for the club.

The Franklin Park trail houses hundreds of Eastern Bluebirds and encompasses a rich habitat for these cavity nesters. Annaliese was already very familiar with the trail, having spent at least five hours a week there at peak migration seasons over the past several years. She has reported many eBird checklists under the park’s location and cataloged some interesting sightings over the different seasons, including a Blue-headed Vireo. Annaliese says she loves the “undisturbed habitat at the park — acres of dense, diverse woods, open grassy fields, and a pond. There’s lots of opportunity for birds to thrive within the park…. This past spring, I found an American Redstart and have seen many Red-shouldered Hawks, Red-tailed Hawks, and Bald Eagles flying around the park, and even an Osprey.”

While we walked the trail to gather information on its current state, Annaliese demonstrated remarkable knowledge of the many birds we encountered in the surrounding woods. We were delighted to see dozens of bluebirds on the ballfield fences keeping an eye on us, a clear indication of the trail’s past successes. 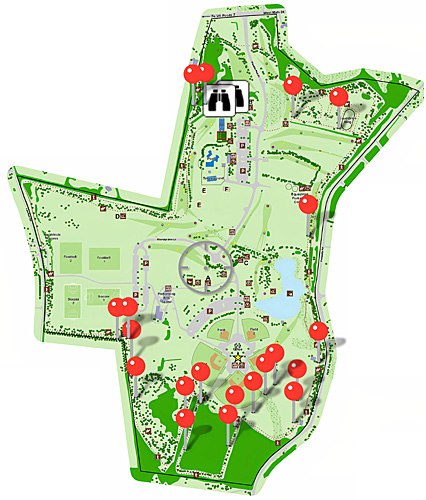 The Franklin Park trail was established in 2004 with 23 boxes. Over the years, it grew to 37 boxes. Some are old and weathered, but most are in good shape and need a simple cleaning. Annaliese has mapped the current path and plans to reduce the number of boxes to a more manageable 10 to 15 in a loop that would take under two hours per visit to monitor. Old poles, baffles, and boxes will be replaced and all boxes relabeled.

Annaliese will go off to college in the fall to study environmental science. “I enjoy learning about concerns for the increasing demands of both land and water because the solutions require a level of critical thinking that suits me,” she said. “However, I would hope to one day become a professor and teach another generation of young minds to appreciate and learn from the natural world.”

The rest of the Loudoun Valley club will carry on at the trail and ideally recruit additional students. We’re very excited to have Annaliese and the birding club join the more than 140 volunteers who monitor trails in Loudoun County each year. 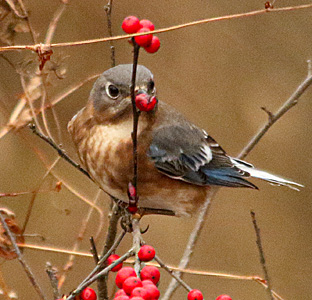 An Eastern Bluebird watches from a safe distance as human monitors walk the Franklin Park trail.
Photo by Annaliese Meistrich 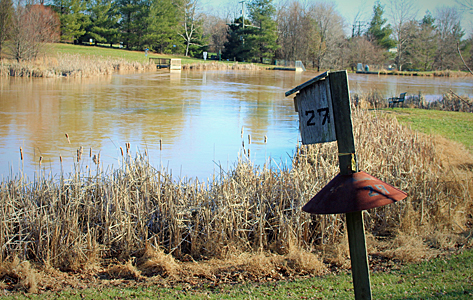 The new monitors from the Loudoun Valley Birding and Ornithology Club plan to reduce the Franklin Park trail’s 37 bluebird boxes to a more manageable number.
Photo by Jeff Davis 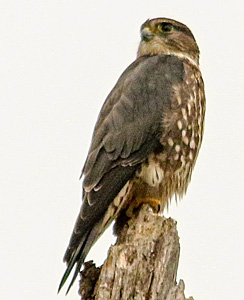 A Red-shouldered Hawk surveys Franklin Park. The hawk was among many other bird species Annaliese has spotted in Franklin Park in the past year.
Photo by Annaliese Meistrich