I have some bad news and some good news. 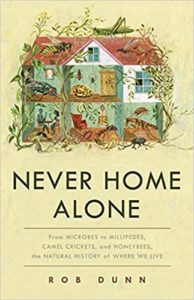 As you read this review, several dozen to several hundred species of Mycobacterium (the genus that includes the pathogens which cause tuberculosis and leprosy) are living in your house. And that’s just in the showerhead you use every day. The rest of your house is even more biodiverse, with thousands of species of microbes, molds, spiders, and insects sharing your space. To put it simply, you are running a biodiversity boardinghouse.

Now for the good news: according to Never Home Alone by Rob Dunn, not all of this is bad news.

Dunn, a professor of applied ecology at North Carolina State University, begins with the story of the father of microbiology, the 17th century Dutch scientist Anton von Leeuwenhoek. After developing a new method of creating high-magnification lenses, Leeuwenhoek used his microscopes to look more closely at everything in his home, discovering thousands of organisms not previously known to exist.

Over time, microbiologists and entomologists moved further afield. By the end of the 20th century, scientists preferred spending their time in the jungles of South and Central America rather than poking around in people’s basements. Dunn and his colleagues are trying to change that, making the case that the most interesting flora and fauna are right here in the comfort of our own homes.

Starting with the smallest of your housemates, bacteria are everywhere. They are found in even the most germ-free human habitats, those being urban high-rise apartments and the International Space Station. We have increased the use of antibacterial soaps and similar products over the last 50 years to try to reduce the number of pathogens. We may have gone too far. During that time, there has been a marked increase in the occurrence of auto-immune diseases like asthma, food allergies, and Crohn’s disease. Studies show that people with less biodiversity in and around their homes have a higher incidence of these diseases. A reasonable number of non-pathogenic bacteria in your home might just be beneficial.

Your showerhead is a different story. Municipal water in the United States is filtered for contaminants and larger living things that live in the aquifer or reservoir. It is then treated with small amounts of a biocide like chlorine. This makes the water you drink and bathe with “safe” and “clean” but it’s definitely not sterile.

Even in your water supply, survival of the fittest applies, and the microbial fittest — those organisms most likely to survive the biocide and thrive in the water system — are bacteria in the genus Mycobacterium. There are thousands of such species, several of them deadly pathogens, and others which are “at least a little bit of trouble.” Mycobacteria thrive in warm to hot water (like you shower with) and their ecosystem (the pipes leading to your shower) is devoid of microbial competition. Over time a thick biofilm of the dead bodies of the bacteria killed by the biocide and the living, reproducing mycobacteria builds up on the inside of your showerhead. Bits of that gunk then rain down on you every time you shower.

Several species of mold are also your tenants. Virtually every home, including the International Space Station, has Penicillium and Cladosporium mold spores. These spores have drifted in somehow and found a home in your home, particularly if it is constructed of wood, a favorite food of the mold.

These two visitors are usually not a problem, but Dunn and other researchers have found another more sinister mold mystery. When drywall gets wet, the toxic black mold Stachybotrys chartarum inevitably appears. Where did it come from? How did it know you have a leaky roof or pipe? A recent study has fairly conclusively shown that the mold spores were introduced in the manufacturing of the drywall (probably in the recycled paper used as sheathing) and lay dormant waiting for a leak to develop.

You are probably not surprised that there is an occasional arthropod in your home. Dunn and his team have studied thousands of houses, and you may be astonished to learn that they find an average of 100 arthropod species in every one. Everybody has spiders living with them, but Japanese camel crickets, German cockroaches, and several different flies are all very common. Enough said.

What should you do about all of this? Dunn recommends that we try not to focus so much on making our homes germ-free, which is impossible anyway, and instead try to bring more of the outside inside. His prescription is to open the windows, replace wet drywall, increase the number of house plants, expand your backyard garden to include different native plants and trees, and spend more time gardening and doing other outdoor activities.

I can offer two other recommendations: First, pick up a copy of Never Home Alone as soon as you can and enjoy this engaging, enlightening, sometimes hilarious, sometimes creepy, grand tour of your home and the creatures sharing it with you. Second, replace your showerhead every year or two. I’ve done both and I’m happy I did.