Saving Stumptown — The Rest of the Story

Did you ever notice a large red and white “For Sale” sign while traveling along Stumptown Road as you approach the intersection with New Valley Church? It identifies 87 acres of woods and farm fields behind the Highway Trailer Court and Ray Wagner’s cabinet shop in Lucketts. Well, Ludlow Clark did. A longtime resident, he had a vision. “Wouldn’t it be nice to save it for the wildlife?” he thought, “and prevent more traffic on our already overburdened roads and provide for the migrating ducks and geese and resident turkeys, fox and deer?” Well, he put that question to a fellow member of the Lucketts Ruritan Club, who said that he needed to speak to the Environment Committee chairman. After checking into that, that chairman just happened to be me!

This was a great idea, but where to begin? We agreed that unless a conversation was started with the right people soon, this unique property would be home to more houses. I turned to someone I thought could help: Nicole Sudduth, Executive Director of the Loudoun Wildlife Conservancy, who was very excited. “I’ve been wanting to protect that property for years!” she said. “Let’s do it!”

I had worked with Nicole while trying to preserve the wooded portion of Yeager and Mary Gum’s old farm south of Lucketts several years back. The initial focus on that farm, now under conservation easement, had been on the most environmentally sensitive and ecologically significant part of the property. The woods along Montresor Road contained several vernal pools — depressions in the ground over karst limestone that capture snow melt and the spring rains to make temporary ponds. These ponds are rare and unique, as are the critters whose life cycles depend upon them, like the salamanders, frogs and fairy shrimp that reproduce there.

Meanwhile, Ludlow had been communicating with the property seller’s realtor. There were several other interested buyers. Nicole convinced Loudoun Wildlife’s board to make an offer to purchase the land. Another Ruritan member and local realtor, Ian Moffett, agreed to help with negotiating a contract. Low and behold! Loudoun Wildlife’s offer was accepted above the two other interested parties! Now the Conservancy had 120 days to find the money. 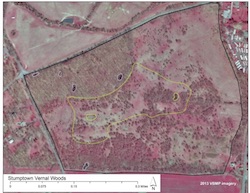 The next step was to “officially” document the property’s ecological significance. In early January Nicole invited Gary Fleming and Karen Patterson, ecologists with the Virginia Department of Conservation and Recreation (DCR) to survey the property. After acquiring the owner’s permission, Gary and Karen, along with Nicole, Loudoun Wildlife Conservancy President Joe Coleman, Lucketts Ruritan’s Moffett (Rokeby Realty), Jay Frankenfeld of Loudoun County Soil and Water and I met early one morning to take a walk in the woods and fields. To paraphrase DCR’s resultant report: the vernal woods tract supports a globally rare wetland community… the unique geological setting and zoological resources make the wetlands even more significant and worthy of conservation, restoration and long-term management. Documenting the parcel’s unique qualities was the easy part. More daunting was the need to procure the funding to purchase the land ($945,000) — and there was precious little time. Potential supporters were approached, but to no avail. There was limited progress at best. Ultimately, time ran out. Loudoun Wildlife would have to back out.

Then a miracle happened! Nicole had early on pitched conservation to county resident Chuck Kuhn of JK Moving Services but had not heard anything back from him. A follow-up call revealed that although Kuhn had reviewed the proposal, it just didn’t seem like a good fit for his investing. Around the 120-day mark, Mike Kane, Land Conservation Officer at the Piedmont Environmental Council, picked up that conversation with him and worked some magic!

Kuhn agreed to purchase the land at fair market value and place it under conservation easement. Once that process was complete, he would sell it to LWC at a lower “conserved” property value. This would remove the development potential from the land, he would get a tax benefit, and LWC would get a significant price break — plus time to raise money. Kuhn has also offered to lease
the property to the Conservancy in the interim.

So perhaps miracles do happen! Many thanks to those caring and passionate people who sweated the details and stayed the course. But the standing ovation goes to Chuck Kuhn, who caught the “Hail Mary pass” and scored the winning touchdown. He has given Lucketts the gift of preservation — preserving wildlife, cleaner air, less traffic and a permanent open space. It will be an everlasting reminder to all who pass these woods and fields.

Loudoun Wildlife’s core mission is to preserve and protect wildlife, so that humans and wildlife can both thrive on our rich lands. To do this we use a multi-faceted approach by inspiring,  educating and engaging our citizens in interactive programs, citizen science, habitat restoration projects and conservation advocacy. As the pressure of housing and business development  increases, we need to be more resourceful, creative and courageous to carve out places for our non-human residents. Through strategic planning and a magnanimous collaboration, we will now add property ownership to our toolbox of conservation practices.

Until 2017, we were not officially able to own land, but after much discussion and examination of our long-term strategic plan we changed our bylaws to allow us to have this capacity, if needed. With the help of JK Moving, the seeds of stewardship are now coming to fruition and we can physically preserve 78 acres of globally rare wetland that otherwise would have been lost to development.

Preserving the Stumptown Woods property is a victory that will allow us to leave a legacy so that future generations will be able to experience the unique wildlife that inhabit the area. According to Joe Coleman, president of Loudoun Wildlife, “Stumptown Woods is a very special property that is worth saving as a natural space. We weren’t able to afford to buy the land, but with the help of JK Moving and the Kuhn family, we will save and preserve this rare wetland. Having a local corporate partner that understands the value of conservation is invaluable.” Chuck Kuhn, president and CEO of JK Moving states, “As a company headquartered here, we know how special Loudoun County is. Preserving and protecting our environment will ensure that our communities will be healthier places to live and work. That’s good for our business, employees, and customers.”

Loudoun Wildlife plans to hold the property in its natural state and conduct occasional field trips and citizen science monitoring just as we do at both the Dulles Wetlands Mitigation Project and at Gum Farm. In addition, there are plans to create a small set of walking trails to enable restricted and guided public access. For more details about how you can get involved in funding this project, contact Joe Coleman, Loudoun Wildlife president, or Executive Director Michael Myers.