On the Wing with Chimney Swifts 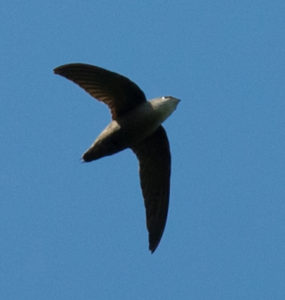 In early autumn, large groups of Chimney Swifts (Chaetura pelagica) gather and begin their migration to South America. In a magnificent spectacle, as many as 10,000 swifts will create a tornado-like vortex funneling into a roosting chimney to spend the night during their migration. Chimney Swifts are found in open sky over cities, towns, lakes, rivers and meadows. They hunt insects on the wing; prey includes flying insects such as mosquitos, gnats, flies, beetles, termites, wasps, and moths as well as bugs that can be gleaned from leaf tips or the surface of water. A pair of Chimney Swifts feeding young will consume more than 5,000 insects per day.

Chimney Swifts live in their winter home in eastern Peru, then migrate north every spring. They normally return to Loudoun County in mid-April. Their soaring aerial ballet and exuberant twittering calls seem to celebrate the exuberance of spring and summer. These small dark gray-brown birds, 5.25 inches long and weighing less than 1 ounce, spend most of their lives airborne, landing only to rest at night and to nest. Even when not flying, Chimney Swifts do not perch like other birds; rather, they cling to vertical surfaces. Their “flying cigar” silhouette, rapid bat-like wing beats and distinctive chittering make them easy to identify. 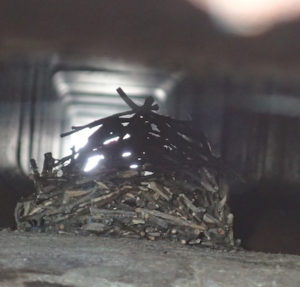 Before the arrival of Europeans in North America, Chimney Swifts nested in caves and hollow trees. However, as human dwellings became available, chimneys and other man-made structures such as sheds became their preferred nesting sites. Unfortunately, now that chimneys are often capped and the widespread use of pesticides has diminished the availability of flying insects, Chimney Swift numbers have declined 72% since 1966 and these beneficial bug eaters are now considered a Near Threatened species.

Shortly after returning to their breeding grounds in spring, a pair performs an aerial dance with both snapping wings into a V-shape and gliding downward together. The mated pair break off twigs as they fly and build a half-saucer shaped nest attached to the interior of a chimney or other structure, glued together with their saliva. This is a labor-intensive process that takes two to three weeks to complete. While only one breeding pair inhabits a nest area, other non-nesting swifts may also be in residence. Incubation of 3-5 white eggs is by both parents for approximately 16-21 days. Both parents feed the young, sometimes assisted by a non-mated helper. Young may climb out of the nest at 14 days and cling to the walls near the nest. Their first flight is at 28-30 days. After the young fledge, parents and young fly together in parades around the nesting site.

What can we do to protect Chimney Swifts? One of the critical issues impacting swift populations is the use of pesticides. It is vitally important these skilled bug catchers have an ample supply of food. Don’t spray pesticides in your yard; if you live in an HOA community, make sure your Board knows you do not support pesticide use. Chimney Swifts also need access to chimneys. If you have a stone, firebrick or masonry flue tile chimney with mortared joints, consider uncapping your chimney in the spring to provide nesting sites. Caps can be replaced in the fall to ensure wood fire safety. Metal chimneys are traps for chimney swifts and other animals and should always be capped. Keep your chimney clean – the best time to clean a chimney is early March, before swifts return. If you are lucky enough to have swifts in your chimney, leave the damper closed to keep them safely in the chimney. Chimney Swifts are protected under the Migratory Bird Treaty Act and it is illegal to remove a nest. Read your chimney sweep company’s policy as it pertains to Chimney Swifts and report companies who do not protect them.

Working together to provide nesting sites and an ample food supply, we can be good neighbors to these fascinating, beneficial flying marvels. With a bit of tolerance and our well-deserved admiration, we can help ensure their chatter and aerial displays will remain a cherished natural wonder in our spring, summer and fall skies.