Beaver (Castor canadensis) fur provided an important economic foundation for the European colonization of North America. To their great misfortune, this semi-aquatic mammal’s dense underfur happened to be ideally suited for the type of gentlemen’s hats favored throughout the 18th and 19th centuries. The tremendous industry in pelts underwrote the rise of the first great global corporation, the Hudson Bay Company, as well as substantial French and later American enterprises, such as John Jacob Astor’s American Fur Company. 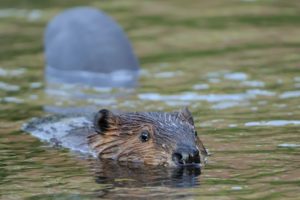 The loss of millions of beaver challenges traditional thinking about what the North American landscape might have looked like. The great forests of the Northeast were almost certainly more omplex mosaics, with beaver ponds found along most streams, shrubs more than trees following riparian corridors, and large clearings (“beaver meadows”) dotting the land where ponds had been abandoned and drained. Traces of the presence of beaver persisted long after they were gone. Louis Henry Morgan described an enormous series of dams, lodges and canals along the railroad as it pushed west through Ohio–archaeological remains of animals no longer there.

What that loss meant for other species of wildlife we can only guess. We do know that beaver wetlands today are biodiversity hot spots, and it is quite possible that we had losses, especially of insects and aquatic invertebrates, that have simply gone unrecorded. Contemporary research does show that beyond preserving biodiversity, many other environmental benefits come with having beaver on the landscape, including water storage and banking, sediment and pollutant filtering, and flood control among others. These benefits could be truly significant if enough beaver were allowed to recolonize places from which they were long ago extirpated, but we still seem to focus more on the conflicts and costs sometimes associated with the return of beaver than the good that recolonization could bring.

The conflicts beaver cause stem largely from our having occupied the floodplains they once commanded. Their impoundments may compromise sewer systems placed along stream drainages, or sometimes flood railroads, farmlands, roads and even residences. Equally concerning can be the downing of trees along streams or from yards accessible to beaver looking for building material. Such conflicts raise genuine concerns and may be especially challenging in suburban and urban areas, crowded enough as they are already. The traditional model of wildlife management is often applied when conflict occurs – lethal removal, ideally by “harvesting” animals in the winter when pelts have commercial value. If that is not practical then beaver may be trapped as “nuisance” animals and/or efforts made to destroy dams and drain impoundments. This often means using backhoes or other heavy equipment to open dams, or in more remote areas dynamite. Both practices are wasteful, expensive and usually self-defeating, not to mention eliminating any of the benefits of having well-maintained beaver wetlands.

Fortunately, new, innovative and far-sighted approaches to managing conflicts with beaver have been developed and are gaining widespread acceptance as word about them continues to grow. What Skip Lisle, former wildlife biologist for the Penobscot Nation in Maine, calls flow devices have made controlling water levels in beaver impoundments both economical and effective. Basically of two general types, flow devices employ large corrugated pipes to move water over dams and stabilize water levels and/or “deceivers”–ingenious fencing designs that prevent damming in the first place. The result is consistent levels of water in impoundments that cannot tolerate variation or backup, leaving the resident beaver to either accept conditions as such or move on to look for more a favorable site. Skip’s company has installed many dozens of these devices throughout the country and even ventured to Europe to demonstrate the technology there. And saving trees? Where desired, simple wire cages (not chicken wire, but heavier gauge material) can be used to prevent beaver damage, not to mention making great Scout projects.

A small piece of beaver arcana for those interested in such things can be taken from the pages of In Beaver World by Enos Mills. This work, first published in 1913, is a delightful description of these animals as he found them around what is today Rocky Mountain National Park (whose founding is often credited to Mills). Like J. Frank Dobie, who wrote about coyotes without the prejudices traditional of his time, Mills approached nature with unbounded enthusiasm, embracing wild animals simply for what they were, not for what uses people might make of them. His writings describe the Moraine Colony, located near today’s Estes Park, which he followed and described over a period of almost three decades as dams were built, lodges raised and abandoned, and ponds shrank and grew. What makes this especially valuable (and interesting) is that another researcher followed it by adding another forty years of records to it, bringing the colony’s history up to the late 1950s. I’ve spoken to Forest Service personnel who are pretty sure it can yet be found, but my brief searches so far have not been productive. Still, if you ever nd yourself staying at the Estes Park YMCA, a short walk outside their property surely puts you close and in exactly the kind of terrain so favored by beaver in the past. You can also visit the Mills cabin, now a museum dedicated to this amazing early naturalist and interpreter of the natural world. Completing the nature tourism experience, just across the road and in sight of the cabin is an early Skip Lisle beaver deceiver that has been protecting that highway from flooding for about twenty years now. No hurry, too, as I think it might last for another twenty years at least.

It is obvious to me that as much as we have learned about beaver, we still have much to learn from them. Hopefully we can find engineering solutions to any conflicts nature’s second best engineers might create, and work with this species to co-manage landscapes that benefit all.

Dr. John Hadidian is former Director of the Urban Wildlife Protection Program at The Humane Society of the United States and co-author of the book, Wild Neighbors: The Humane Approach to Living with Wildlife.

Enos A. Mills, In Beaver World (University of Nebraska Press 1990). 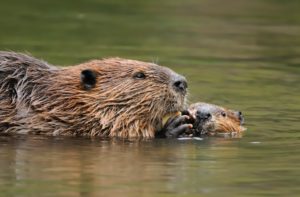 Buddy and his dad
Photo by Carson and Jim Clark
www.jimclarkphoto.com

The Story Behind the Beaver Photos

The stunning beaver photos are by Jim and Carson Clark, a father and son team. While expounding on Carson’s interest in beavers, they pursued capturing them on film and in writing. From their adventures, they created two children’s books, seen through
Carson’s youthful view and camera lens.
Adventures of Buddy the Beaver:
Buddy Explores the Pond
and
Mystery of the Missing Friends