As the weather gets colder, there are several species of insects that are notorious for entering our homes. Many insects die in the fall, but some enter a hibernation phase called diapause. They find shelter and wait for more favorable conditions in the spring. Houses are cozy all winter long, and make a tempting hideout. Insects are small enough to squeeze unnoticed through holes. Species that congregate use pheromones to find each other and form groups, adding to the problem. We find these insects collecting in our rooms, buzzing around lights, and crawling along windowsills! The good news is that in most cases, the presence of these insects is merely an annoyance and poses no real threat. But sometimes their large numbers can be alarming, and some people can’t help feeling overwhelmed by the “invasion.” 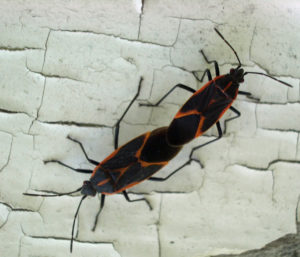 A few of the winter congregating species are native, having naturally occurred in this part of the world for a long time. An example is the Boxelder Bug (Boisea trivittata). These bugs are black and reddish orange and about 1.4 cm long. They are so named because they feed on maple seeds, particularly boxelder. Other insects that enter our houses are exotics or nonnatives, which have been relatively recently introduced to our area. These insects often hail from Asia and adapt well to our similar climate. Species might find their way here on their own, or they are intentionally or accidently introduced by us. Two species which you may be familiar with are the Brown Marmorated Stink Bug and the Multicolored Asian Lady Beetle. 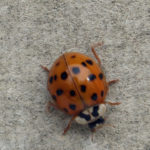 The Multicolored Asian Lady Beetle (Harmonia axyridis) can have incredibly variable color and spot number, making it tricky to identify. It can be yellow, red, orange or black, and have anywhere from zero to 20 spots. In some varieties, markings on the pronotum (behind the head) that form a black M or W can be useful to identify it. These beetles have been repeatedly, intentionally introduced to control aphids starting in 1916. Since then, they have become invasive, and spread all over the country, sometimes outcompeting native species. We have native lady beetles that also hibernate for the winter in other parts of the country. The Convergent Lady Beetle (Hippodamia convergens) is a native species commonly found throughout North America. In the western Unites States it travels into the surrounding hills and mountains where it congregates in large numbers to hibernate for up to 9 months. 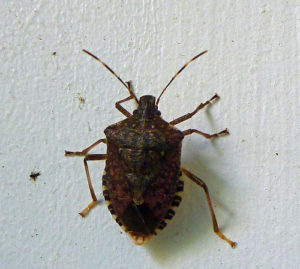 The Brown Marmorated Stink Bug (Halyomorpha halys) is a large-bodied true bug. It grows up to 1.7 cm long with a mottled brown appearance and tan belly. It has brown and white banded antennae that differentiate it from similar native species. It was accidentally introduced recently, the first one collected in Pennsylvania in 1998. Since then it has spread across the nation, feeding on crop plants such fruit trees and beans. As a pest they are a big problem, but most people don’t notice them until they start moving into houses for the winter. They have created quite a stir! They are harmless, but if disturbed they emit a strong scent, which has been compared to cilantro, from glands along the underside of their bodies. Natural predators such as birds and wasps have begun adapting to the new plentiful food source and are feeding on stink bugs, but their numbers are still quite high.

The best way to control these insects is to seal your house. Check windows and screens for holes, check where pipes or wires enter the house, use door sweeps, and seal up cracks with caulk. Using pesticides is not advisable, because most are only effective if directly applied to an insect’s body. Other chemicals that are long lasting are too detrimental to the environment. They kill all insects indiscriminately, including beneficial pollinators such as bees. When I see these invaders during the winter, I’m honestly just pleased to see a living insect! Winters can be long for an entomologist.

(All photos by Emily Bzdyk)