Groundhogs (Marmota monax) are gentle, often times comical, vegetarians. They are celebrated on February 2, but may not be as welcome in your garden later in the year. Conflicts with groundhogs usually occur over who gets to eat the vegetables. Despite their attraction to what grows in your garden, it is possible to live in harmony with groundhogs with a bit of tolerance and preventative measures. 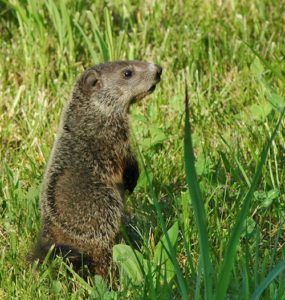 In addition to symbolizing the beginning of spring, groundhogs play an important role in the ecosystem. Their defecation inside the burrow fertilizes the earth; their digging loosens and aerates the soil, and their eating habits can determine which plants will grow. (They feast on dandelions!) Abandoned burrows provide homes for other small animals, amphibians and reptiles. Groundhogs are also an important and abundant food source for large predators like hawks, owls and coyotes. Groundhogs are not considered a significant source of any infectious disease that can be transmitted to humans.

In spring and early summer, mother groundhogs may nurse their young under sheds and decks. If you spot a groundhog living under your shed, there is no cause for alarm. Groundhogs simply do not attack humans, our children or pets. If chased, they quickly flee. We encourage you to leave them alone at least until the young are on their own which is about eight weeks after they are born. Also, it is a delight to observe the attentive care groundhogs give their young. Contrary to what you might hear, they do not undermine the foundation of a building. In fall, excluding them before they move into burrows for winter hibernation is most effective.

If you must evict a groundhog from its den, place dirty kitty litter or ammonia-sprinkled rags down the burrow (waiting at least until late summer when young have left the den). Groundhogs react to urine odor as a potential predator, causing them to leave. If burrows present a potential hazard to humans and pets, flag them with something visible, like a cone or a flag.

To keep groundhogs out of your garden:

Groundhogs have many predators and their daily existence is one of constant watchfulness. Although some find groundhogs to be pests, many of us enjoy seeing these amusing furry marmots. Tolerance and understanding allow us to observe and appreciate the wildlife around us, giving new depth to our own life experiences.