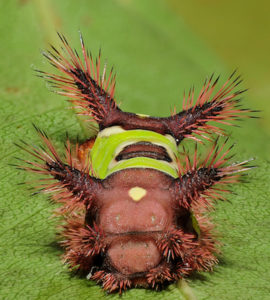 When I was a kid, I loved raising caterpillars. It was part of my general insect obsession, which eventually led to my future as an entomologist. One summer, I found a group of Io Moth caterpillars feeding on a tree by my grandma’s pool. Not bothered by the fact that the caterpillars apparently could sting, I gathered them carefully and brought them home in a small terrarium. You can probably guess where this is going… the whole colony of caterpillars escaped into my home. My parents, brother and I were all subjected to painful stings for a week as we picked up objects such as stuffed animals or dishtowels, unsuspecting of the hidden caterpillars underneath.

My curiosity as a child introduced me to one of the lesser-known defensive tactics of caterpillars. Caterpillars regularly rely on camouflage or being poisonous to eat to protect themselves, but a few can “sting.” In addition to the Io Moth caterpillars I encountered, examples include the caterpillars of Saddleback, Tussock, Hag and flannel moths. Many caterpillars such as Wooly Bears have hair-like structures, which may act to deter predators. However, some caterpillars take this a step further with hollow setae like tiny hypodermic needles filled with irritating substances. The small spines of the Saddleback and Io Moth caterpillars break off, and the poison inside can contact your skin. The hairs of others such as the Tussock Moth caterpillars are simply irritating and are called ‘urticating bristles.’

Io Moth caterpillars (Automeris io) are bright green with red and white stripes down the sides and are covered in branching green structures with black tips. The Saddleback (Sibine stimulea) has a similar green color but with a brown middle and green oval “saddle” shape in the center; four projections of spines stick out from front and back. The Hag Moth (Phobetron pithecium) and Southern Flannel Moth (Megalopyge opercularis) caterpillars look like little fluffy beige fluffs. Another flannel moth, the White Flannel Moth (Norape ovina), has a caterpillar that looks quite different, with black body, red ends and white dots. Tussock Moth caterpillars (Orgyia sp.) have brushy tufts of hair down the middle and longer hair on the ends; Milkweed and White-marked Tussock moth caterpillars are two examples. These are just a few of the stinging caterpillars found in our area. If you find a suspicious caterpillar, it is best to avoid touching it until you can identify it.

If you are unlucky enough to handle a stinging caterpillar with your bare hands, you may learn just how effective their defense is! Reactions can range from an itchy or irritating rash to more serious effects. Like a wasp or bee sting, some people are particularly sensitive to the compounds and will need medical treatment. Otherwise, treat it like a bee or wasp sting and apply an ice pack if swelling occurs. Itching can be treated with topical ointments. Make sure to remove any irritating hairs stuck in your skin. Unlike wasps and bees, the “stings” of these insects are passive and result only from handling. As long as you avoid contact with them, they are harmless.