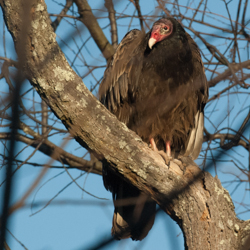 There’s a vulture roost near my house! Should I scream and run, or jump for joy?

1. Do people become sick as a result of proximity to vultures?

We have NOT found any evidence that people become sick as a result of proximity to vultures. Here’s what we HAVE found:

–       Two different vulture species are native to North America: Black Vultures and Turkey Vultures. Both vulture species eat and sterilize contaminated meat. In one study in which vultures were fed disease-causing organisms, including anthrax, it was found that most bacteria were killed in the vultures’ highly acidic stomachs. In the absence of vultures, rotting meat would be consumed by other creatures that many humans find undesirable, such as maggots and bacteria. Most people would prefer one vulture over the different species of bacteria numbering in the millions, or the several pounds of maggots, that would be required to decompose a carcass.

–       Vultures probably prevent the spread of disease. Without vultures to efficiently remove large amounts of decaying meat, both air and groundwater would show increased contamination.

–       Vulture poop is actually a sanitizer. After stepping in a carcass, vultures will often expel their waste, which is white and fluid, onto their legs. The uric acid kills any bacteria that they may have picked up from the dead animal.

2. Are people injured by vultures?

We have NOT found any evidence that people are injured by vultures.  Here’s what we HAVE found:

–       Black Vultures have been known to attack weak, sick, or unprotected young birds and mammals. Turkey Vultures are non-aggressive, and generally do not kill, though there are a small number of accounts of Turkey Vultures killing weak live prey such as baby rats or small fish.

–       Vultures prefer the meat of herbivorous animals, avoiding that of carnivores.

3. Do people experience property damage as a result of living near a vulture roost?

–       Black Vultures have been known to cause some damage – mostly by picking at caulking, or at rubber and vinyl on buildings and vehicles.

–       Black and Turkey Vultures may leave feces and regurgitations on roofs or decks – just as many other birds deposit their waste. Vulture waste washes away quickly and easily with a hose and scrub brush.

4.  Vulture populations are not at risk, right?

–       Populations of Black and Turkey Vultures have on average been increasing, both across the United States, and across the Commonwealth of Virginia.

–       Here in Loudoun County, the picture is mixed. According to annual Christmas Bird Count data, the Black Vulture population has trended upward, and the Turkey Vulture population has remained roughly stable since Loudoun Wildlife Conservancy began coordinating this data collection activity in 1997. It is important to note that the populations of both species have dropped abruptly in some years – most recently in 2007 – before rebounding the next.

–       Around the world, vultures are particularly prone to endangerment because the carcasses they feed on may have pesticides, toxins, and drugs. Even if our North American Black and Turkey Vulture populations seem secure today, we cannot assume that they will remain secure in the future.

5.  Is it necessary to drive vultures away with harassment techniques like killing one or more vultures and then hanging them for other vultures to see?

We have NOT found evidence that it is necessary or effective to kill one or more vultures and then hang them for other vultures to see. Further, hanging a dead vulture is a barbaric act which can traumatize humans. Here’s what we HAVE found:

–       Turkey and Black Vultures are federally protected by the Migratory Bird Treaty Act of 1918. Killing any of these birds must be justified by strict standards including evidence of property damage or health risks, along with evidence that non-lethal means have been attempted.

–       Any dead vulture will create an unsanitary environment, attracting ground-bound scavengers such as coyotes and foxes, which may pose more risk to humans.

–       Any form of harassment is ineffective and unnecessary with migratory birds. While populations of Black and Turkey Vultures do reside in Loudoun County year-round, our winter vulture populations swell as a result of natural migratory bird activities, and then decline naturally as some birds fly north to reach their summer habitats.

–       If vultures are scared away from one community, they simply move to another nearby community.

–       According to the USDA, one of the most effective ways to discourage vultures is simply to remove or enclose obvious attractants like open garbage.

–       If after considering all the alternatives you still feel the need to drive vultures away with harassment techniques, there are non-lethal methods that are both effective and safe for everyone in the community – for example, motion-activated sprinklers.