The Life Cycle of a Monarch

In the span of 12 short months, four generations of butterflies will emerge: great-grandparents, grandparents, parents, and offspring all in one year! The first few generations live just two to six weeks, dying shortly after mating and laying eggs. The fourth generation, the ones born in September and as late as October, are the exception – some will live as long as nine months and travel over 2,500 miles. Let’s take a closer look! 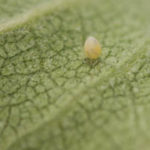 Female Monarchs lay their eggs on milkweed plants, providing an immediate source of food for the larvae. Milkweed plants contain a milk-like substance which is toxic to other animals (but not other bugs which eagerly eat Monarch larvae). Monarchs eat milkweed to help protect them from being eaten by others. 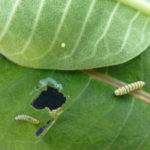 Three to five days later, the egg hatches a larva, or caterpillar. The caterpillar feeds on milkweed leaves, pods, stems and flowers and rapidly grows until it reaches nearly 2,000 times its original size! Caterpillars literally grow right out of their own skin. Old, wrinkled skin peels away (molts) to reveal new skin. This occurs five times before they reach full size. Each molt is called an instar. 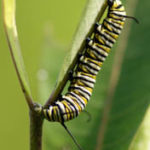 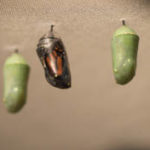 Upon reaching full size, the caterpillar will find a safe, sheltered twig or branch suitable for its transformation – or metamorphosis – into a butterfly. The caterpillar will hang from the underside of the twig, where it will shed its skin, revealing the chrysalis: a soft, jade-green shell with gold trim. This soft shell will slowly harden. Inside the caterpillar is undergoing an amazing transformation. About 10-12 days later, the chrysalis darkens and becomes transparent until we can see the delicate butterfly folded up inside. At this point, it won’t be long before the butterfly cracks open the chrysalis and emerges. 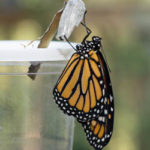 The life cycle of a Monarch is continuous throughout the summer – hatching, pupating, emerging, mating, laying eggs and dying – about every four to six weeks. Each generation seeks growing milkweed and nectar plants, drawing them further north or east. The generation which emerges in September and October looks similar to each of its predecessors, but is different. This generation emerges in a state of diapause. This simply means that it is not yet ready to mate and lay eggs.

The Monarch must make an incredible journey south to a place they have never been before to survive the winter. To conserve energy, they soar and glide on warm air currents for over 2,000 miles, stopping along the way to feed and refuel. Once they arrive at their wintering grounds in Mexico, they gather together in immense clusters to conserve energy, stay warm, and protect themselves against predators. After several months, the lengthening of days will signal to the Monarchs it is time to fly north and start the cycle again.

Monarchs face many perils – loss of milkweed plants due to increased use of pesticides and genetically modified crops (GMOs), parasitization, predators, disease, bad weather, and even being hit by cars. Read about what you can do to help Monarchs in this issue of the Habitat Herald. Most of all, cherish and protect the Monarchs seen in your yard by providing them with pesticide-free milkweed and other nectar plants.