The Magic and Mystery of Old Stone Walls

By Emily W. B. Southgate 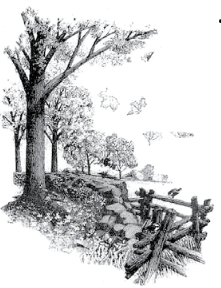 Who can ignore the window into the past offered by a stone wall buried deep in a forest? No one would build a wall in the middle of the woods, so we know right away that sometime in the past the land was farmed and there were fields on at least one side of the wall. Stone walls tell a story if we look at them carefully.

Stand on a stone wall, or in a gap where the trail passes through it (an old gate between two fields) and look along its length. If the trees along the wall are large with gnarly old branches or branch scars low on both sides of the trunks, this wall separated two open fields when the trees were small. These trees are younger than the wall, or grew after the clearing of the fields. Big trees on one side only, leaning over the wall, were reaching out toward sunlight in a farmer’s field from their wooded side. Sometimes we see several ages of trees as we gaze away from the wall, with older trees closest and younger ones farther away. This tells us that the farmer allowed shrubs and trees to grow by the wall, perhaps to give shade to a pasture or to provide a cool place for his lunch breaks. Sometimes there are two or more differently aged sections, indicating a gradual abandonment of the field.

The wall itself can tell you a lot about the past, too. A wall is not just a long pile of stones thrown in a pile haphazardly as a field was cleared. In the early 19th century there were wall-building contests to see who could build a good wall to a certain height the fastest. Farmers built walls with care, expecting them to stand for many years as fences. Sometimes they were made higher by wooden fences, as we see on the new walls built in many areas around northern Virginia.

Once the wall was built, it began to develop character. Lichen spores landed and found small crevices or depressions with enough water to germinate and grow. Most of the stones used to build walls probably did not already have lichens growing on them, as they had been partly or wholly buried in soil or leaf mold before the farmer began clearing the land. Since some lichens grow concentrically, they give us an idea of how old they are and we can use them to estimate the age of the stone wall. Other lichens blend with the stone so the color you think is stone is actually lichen. If you chip off a piece you will reveal the stone’s true color and perhaps see an orange “weathering rind” on the surface of the broken stone. Once lichen has trapped enough dust to form a very small bit of soil, ubiquitous moss spores germinate and the rock sprouts a cushion of moss. Look at a wall carefully to see how many different kinds of lichens and mosses have taken up residence. A few common ones are easy to identify, such as the dark green bed of rock cap moss (Dicranum) and the lichen with red tops, called British soldiers (Cladonia cristatella).  Sometimes enough soil accumulates to support ferns and other vascular plants, especially as the wall collapses and larger crevices appear in its structure.

Walls are also home to a myriad of animals, only some of which are big enough for us to see. Between the stones are spiders, ants, and other arthropods. Snakes, mice, and chipmunks make their homes in the walls, though not in the same place for long! If I have just seen a chipmunk scurry into a hole in a wall, I clamber over it with confidence knowing I will not encounter a snake.  Birds, too, forage for seeds that have collected amongst the rocks and some will nest in stone walls.

When Robert Frost said “something there is that doesn’t love a wall,” he was speaking metaphorically and reflecting on how the passage of time will ultimately topple a wall. He saw walls as barriers, but we can look at them as relics of the past that survived to our day and as special habitats harboring beauty and life throughout the woods of Loudoun and elsewhere.  Where rocks are found at the surface of the ground, we know people once carried them as they tamed the land from woods to pastures or farmland. Next time your trail crosses an old wall, stop for a few minutes and enjoy its special beauty and diversity and marvel at the history it stores.

Mending Wall by Robert Frost
Something there is that doesn’t love a wall,
That sends the frozen-ground-swell under it,
And spills the upper boulders in the sun,
And makes gaps even two can pass abreast….