In recent years there has been a marked increase in the Bald Eagle (Haliaeetus leucocephalus) population in the Mid-Atlantic States, the direct result of banning the insecticide DDT.  As a result, sightings of both adult and juvenile Bald Eagles throughout Loudoun County have become much more frequent. 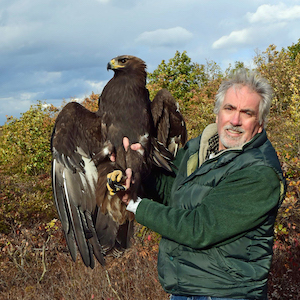 Winter is an especially great time to view these majestic birds since the trees have lost their leaves, making their large, broad bodies much easier to spot. What most observers don’t realize when they make a sighting, however, is that while the Bald Eagle is often the first thing that comes to mind, they may actually have seen another variety occasionally found in our area known as the Golden Eagle (Aquila chyrsaetos).

While relatively rare, the Golden Eagle can be seen in Loudoun County during the fall and winter months. During the summer months, eastern breeding Golden Eagles nest mostly in points north such as Canada, Labrador and the Hudson Bay region. Nesting occurs on cliffs or hillsides where mated pairs raise one or two young. Around mid-October, the juvenile eagles begin to migrate south, followed shortly thereafter by the adults. These migrants will spend the winter months throughout the eastern United States ranging from Maine to Georgia. Many will also winter in southwestern Virginia and the remote areas of West Virginia, Kentucky, and Tennessee.

For those who know what to look for, the chance to see one of these rare birds is quite good. The migration route of these eastern Golden Eagles often brings them down along the spine of the Alleghany and Blue Ridge Mountains. In recent years, raptor migration counts, such as those at Hawk Mountain and Waggoner’s Gap, have noted a small but growing number of Golden Eagles. Closer to home, the Snicker’s Gap Hawk Watch, on the western border of Loudoun County, sees several Golden Eagles in migration each year. Because raptor migration (and those of other birds) depends heavily upon weather patterns, it may slow or stop for several days during poor weather.

Both the Bald Eagle and Golden Eagle will feed on the richness of road-killed carrion found along the county’s many roads. However, unlike the Bald Eagle, Golden Eagles will actively hunt small game such as squirrels, rabbits, ground hogs and even birds, ducks and Great Blue Herons.

An adult Bald Eagle is easily identified by its distinctive white head and tail.  Problems arise, however, when trying to distinguish juvenile Bald Eagles from Golden Eagles, which look very similar. However, if you look carefully, you will notice that the beak and head are much larger on Bald Eagles than on Golden Eagles. The beak is both long and thick, giving the Bald Eagle the proboscis look of the late comedian Jimmy Durante. Golden Eagles, on the other hand, have much shorter beaks and, as a result, their heads look more in line with those of hawks. Also, Golden Eagles, regardless of age, sport distinct golden hackles (see photo).  If the eagle is flying, look at the head size.  For the Bald Eagle, its large head will be over half the length of the its tail whereas in Golden Eagles, the head is much smaller and less than half the tail length.

In addition to differences in head size, juvenile eagles also differ somewhat in their coloring. Generally, sub-adult Bald Eagles tend to have a lot of white mottling throughout the wings, body, and tail.  First- and second-year juvenile Golden Eagles are fairly easy to identify as they show distinct white patches in their dark wings, and their tail has a striking white base terminating in a distinct dark band (see photo).

Increasing your odds of seeing a Golden Eagle

There are ways to increase your odds of seeing a Golden Eagle. Their migration occurs between mid-October and the end of November. To witness a Golden Eagle on migration, you must find a spot on a mountain ridge that lies along their migration flyway. Choose a breezy day with west winds and plan to wait for several hours. A good pair of binoculars is required.

Hopefully, you will be rewarded with great shows of Bald eagles coursing up and down the mountains, often accompanied by comical ravens. These two species will play vigorous games of tag with each other for hours on end. If you are lucky, you will also have the pleasure of seeing one or two Golden Eagles fly by.  Both species of eagle can do cartwheels and barrel rolls and often put on spectacular shows.

Behaviors one may see when observing Golden Eagles

Golden eagles are truly unique and powerful birds of prey.  Soaring is perhaps their most common behavior. Long six- to seven-foot wingspreads allow them to use the gentlest breeze and thermals to quickly circle high into the air.  From these lofty heights, they can survey their domain, hunt for prey or search for carrion. Like the Bald Eagle, Golden Eagles chase each other across the sky or play with ravens.  Ravens don’t seem to play with Golden Eagles as readily as they do Bald Eagles, and perhaps with good reason.

One of the wildest encounters occurred between a Golden Eagle and a Northern Harrier.  An immature Golden was soaring along the west side of a mountain when a harrier cut across the top of the ridge. The harrier must not have seen the eagle because it flew south down the ridge unconcerned. The eagle, however, had other ideas. It immediately turned and powered south, grabbing the harrier out of the sky with its talons. After the Golden had carried the harrier a few hundred yards, it released it, unharmed, and flew off to the north.  The harrier made a hasty retreat, hopefully with just a ruffled feather and a bruised ego.

Because Golden Eagles are rare in the east, there are several environmental concerns that may affect the long-term health of their population. Among these is the loss of habitat, electrocution by power lines, shootings, lead poisoning and wind powered generators. Lead poisoning from shot game fragments has been an ongoing concern with both Bald Eagles and Golden Eagles. Some states (and concerned hunters) are switching over to bullets that do not contain toxic lead. Virginia does not allow lead shot for duck hunting east of interstate 95, however it does not regulate it elsewhere.

One of the biggest threats to the Golden Eagle may be the influx of wind farms. Over 30,000 of these turbines are to be built on the ridge tops of the Allegheny Mountains between Pennsylvania and Virginia. Many of these turbines lie along major migratory flyways of our Golden Eagles (as well as other birds and endangered bats). The impact of these turbines on the Golden Eagle population is unknown, but at several large wind farm sites around the world, they have had a detrimental effect on raptor populations. Ongoing studies involving radio tagged Golden Eagles in Pennsylvania and Virginia hope to shed light on the impact of wind farms on our nation’s magnificent eagles.