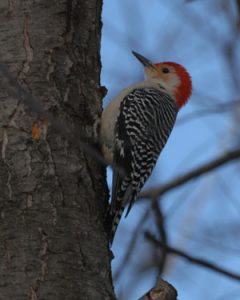 The Red-bellied Woodpecker is named for the light, red wash that appears on its belly.

As with other woodpeckers, these birds rely on a plentiful supply of dead trees for nesting sites, protection from harsh weather, and food sources.  Woodpeckers  play a critical role in controlling populations of insects.

They also play a secondary role in that the holes they create in dead trees or limbs serve as nesting sites for many other cavity dwelling birds such as owls, kestrels, flycatchers, bluebirds, wrens, chickadees, nuthatches and Tufted Titmice. Even squirrels take over some of the cavities that are excavated.

During summer and fall, Red-bellied Woodpeckers spend most of their feeding time scouring upward along tree trunks, seeking out insects. However, during the winter months, they feed mostly on nuts and berries, especially those of the Virginia creeper, dogwood and poison ivy.  In preparation for winter, this woodpecker stores nuts and berries in crevices in trees and in grooves in bark.  Often the Red-bellied Woodpecker will gather an initial stash in one spot and then, once this stash is sufficient, it will disperse the stash to various locations for safe keeping.

These stashes provide the bulk of the winter food supply and are therefore guarded and defended by the woodpeckers throughout the winter.  As spring and summer come, the Red-bellies transition to eating more insects—primarily ants, wood-boring beetle larvae, grasshoppers, wood roaches and caterpillars.

In early May, they start their breeding activities by drumming in a pattern specific to their species, generally a few slow taps followed by a short spurt of rapid drumming.  Red-bellied Woodpeckers prefer dead limbs of living trees or recently dead trees that still have bark on them.  Cavities that they create are generally a foot deep. With Red-bellied Woodpeckers, the courtship period has high ceremony associated with it.  Once a nesting hole has been selected, the male and female engage in a series of tapping patterns.  The male enters the nest hole and taps from the inside of the outside wall.  The female subsequently taps on the outside wall, and soon they drum together in perfect harmony.

Unlike many songbirds, Red-bellied Woodpeckers have only one brood of young per year.  They lay 4-5 white eggs that hatch after about two weeks of incubation which is done by both parents. The changing of the guard for incubating the eggs also has a ceremonial aspect to it.  The approaching bird makes a series of soft calls while outside the nest.  The parent inside the hole taps on the outside wall indicating she/he is ready to switch and then takes leave of the nest.  Both parents participate in the feeding and fledging of the young, which occurs in early summer.

Red-bellied Woodpecker populations are on the increase, although their habitat is threatened by “woodland sanitation” efforts to “clean-up” the woods by removing dead and dying trees and food sources.  Their populations, previously confined to the southern states, are gradually moving northward, and these birds can now be seen as far north as Massachusetts.

Interested in learning more about woodpeckers? Check out our Woodpeckers of Loudoun article. We also have a Woodpecker Word Search Puzzle for some fun.