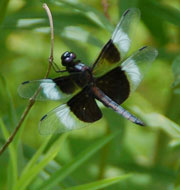 The Widow Skimmer Dragonfly (Libellula luctuosa) is one of our common garden and pond residents.  It has a steely blue body area and dark patches that go all the way to the base of the wing.  The males have white patches in the middle of each wing, while the females and immature males do not.

This dragonfly got the “widow” name because, unlike most other dragonfly species where the male stays near the female after she lays the eggs, the male in this pair leaves her after the eggs have been laid.  As with other dragonflies, eggs are laid in ponds where they hatch. The nymphs live in the water, molting and growing until they are ready to emerge from the water and then molting a final time to reveal their wings.

Perching on vegetation where they watch for prey, the widow skimmer will eat thousands of mosquitoes, biting flies, midges and other insects in the garden and around ponds.