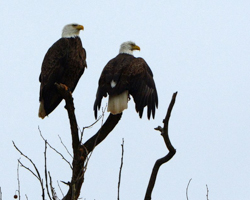 Aldo Leopold, author of ‘A Sand Country Almanac’ and the father of modern naturalist, wrote: “There are those who can live without wild things, and some who cannot… Like winds and sunsets, wild things were taken for granted until progress began to do away with them.” He wrote those words 50 years ago. If anything, in spite of greater awareness and increased stewardship, the wild things are more threatened than ever. And truth be told, none of us can live without them.

I am neither a biologist nor a professional naturalist, simply an amateur observer. While I spend my working hours in an office. I spend my other hours watching and learning about nature, for many reasons. It is fun and can take my breath away. It causes me to stop what I am doing and contemplate. It is a complex world, full of life and full of death. And from my observations and from my readings on nature, I have learned many things.

Whenever I see one of our stunning birds of prey, whether it’s a magnificent eagle or our smallest falcon, the kestrel, soaring overhead, I am reminded how close we came to losing many of these birds forever because of our passion for controlling insects. There are few people today who do not believe that an eagle or a grizzly is worth preserving. But what about the smaller and especially the less-appealing animals? They don’t inspire the same support, but nonetheless, they are part of an incredibly complex web.

Little did we realize that the DDT we sprayed on insects would rise up through the food chain and ultimately cause birds like eagles, peregrines and ospreys to lay eggs so fragile they broke when sat on, even by a bird. A bird cannot hatch an egg without sitting on it. And who knows what DDT and many of the other pesticides were, and still are doing to us? There is no doubt that while some insects are pests and need to be controlled, insects serve a purpose. Without insects, life as we know it would not survive.

Edward Wilson, a biology professor at Harvard and winner of the Pulitzer Prize, explained in his book, “The Diversity of Life,” that over half of all animal species existing on the planet today are insects. He wrote: “The immense diversity of the insects and flowering plants combined is no accident. The two empires are united by intricate symbioses. 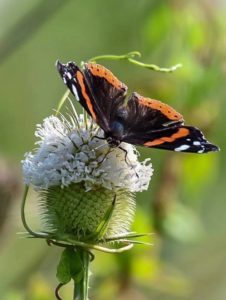 The insects consume every anatomical part of the plants while dwelling on them in every nook and cranny, a large fraction of the plant species depend on insects for pollination and reproduction.Ultimately they owe them their very lives, because insects turn the soil around their roots and decompose dead tissue into the nutrients required for continued growth.

So important are insects and other land-dwelling arthropods that if all were to disappear, humanity probably could not last more than a few months. Most of the amphibians, reptiles, birds, and mammals would crash to extinction about the same time. Next would go the bulk of the flowering plants and with them the physical structure: most forests and other terrestrial habitats of the world. The land surface would literally rot. As dead vegetation piled up and dried out, closing the channels of the nutrient cycle, other complex forms would die off, and with them all but a few remnants of the land vertebrates.”

Fortunately, we are learning. Much has changed in the last 20 years. Many of us garden because we love to grow vegetables for fresh food and flowers for their beauty. However, Sara Stein explains in her book, “Noah’s Garden: Restoring the Ecology of our Own Back Yards,” many of the flowers and shrubs we plant can not survive without our constant attention. As a result there has been a large movement to garden with native plants and to plant for wildlife.

Gardening for wildlife involves using plants that attract butterflies and birds. In fact, more and more people have learned to use native plants, experts at coping with our native pests and our weather. Lots of people have butterfly gardens. And when you garden for butterflies, when you add the flying flowers to your garden ~ as my wife describes butterflies, goldfinches and hummingbirds — you must use pesticides lightly, if at all.

Some of the caterpillars that eat our plants become some of our most beautiful butterflies. We’ve learned that those bug-zappers that had become so popular are almost worthless because, out of every hundred bugs that they attract and kill, only a few are pests and many are important pollinators. People are learning that it is not a bad idea to share the land with its natural residents.

Aldo Leopold, the father of modern land stewardship programs, also wrote, “We abuse land because we see it as a commodity belonging to us. When we see land as a community to which we belong, we may begin to use it with love and respect. There is no other way for land to survive the impact of mechanized man, nor for us to reap from it the esthetic harvest it is capable, under science, of contributing to culture. That land is a community is the basic concept of ecology, but that land is to be loved and respected is an extension of ethics. That land yields a cultural harvest is a fact long known, but often forgotten.”

In the early 17th century when John Smith first came up the Potomac, he found a river teaming with wildlife. It ran clear and included fields of submerged aquatic vegetation. There was so much wildlife in and around the river that this was truly a land of plenty. The pristine Potomac was one of several rivers that supported the incredibly abundant Chesapeake. Today we’re striving to bring that abundance back. We’re planting forest buffer zones along our rivers and their tributaries.

At the same time, new settlers are coming out from the city and the suburbs. This new settler sees this world as safe and quiet, a world where the concept of community still exists. Many of them truly enjoy and value the wildlife that is here. However, all of us must work together to maintain the existing community and to include the land and its wild inhabitants as part of that community. 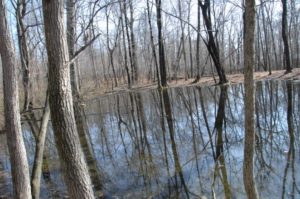 We need to learn to tolerate and share some of our bounty with our wildlife neighbors. It is much harder to restore something ruined and lost than to preserve it in the first place. We need to become stewards of our streams, our forests and our meadows and all that lives in them.

A passage from Bernd Heinrich s “The Trees in My Forest” explains better than I could why we need to save the natural world that surrounds us. Bernd Heinrich is a professor of biology at the University of Vermont, twice nominated for the National Book Award for science, and the owner of a couple of hundred acres of forest in western Maine that he observes and harvests:

Why do we need forest [or other wild areas]? There are many compelling reasons, but they are not generally tabulated in quarterly balance sheets. Ecosystem ‘services’ include air and water purification, flood control, erosion control, nutrient recycling, and pollination services. Ecologically, forest is natural habitat and most species on earth are adapted to it and require it. There have been and are many practical arguments for forest [and other wild areas] – practical in the material sense.

Ultimately advocates for forests are motivated also by ethics rooted in our own psychological dependence on wilderness. Conservationists such as Aldo Leopold, E.O. Wilson, and John Muir; authors such as Thoreau (“in wilderness is the preservation of the world”) and politicians such as Teddy Roosevelt, who set a new concept on this earth (national parks), have all in their own way reaffirmed that like other animals we, too, need forest or other wilderness to live happy adapted lives.

Like other species, we evolved in wilderness and although we are now able to satisfy many of our physical needs outside it (at least in the short term), psychologically we still need the vital diversity, complexity, grandeur, and beauty of wild places. We need to feel connected to something tangible that can be seen, smelled, tasted, that is much greater than our own fleeing existence. Call it religion.

There are untold millions who believe in this religion although they may not come out and say so, mostly because its tenets are so deeply ingrained as to be taken for granted. To me and others of this religion a wilderness made by God and/or by the mechanism of evolution is at least as, if not more, holy than a cathedral made by man, and to harm it is a desecration. I see through glimpses of this forest to feel inspired by a feeling of interconnectedness with the web of life. It gives me a dream. It is a realistic dream that is not destructive, and that all can take part in and enjoy the results.”

A Jewish proverb holds that if you save one life, you save mankind. Similarly, by saving one species of animal or one piece of forest, we save the world.