In Harmony With Nature: Flying Squirrels

My wife and I were doing the annual cleaning of the birdhouses, and were really pleased to see how many of them had been used and needed cleaning, nearly ninety percent. We clean only the birdhouses close to the ground and the three martin houses mounted on top of long poles that pivot down to the ground. The houses up out of reach in the trees don’t need to be cleaned out. Those we clean have one side mounted so that it can be pivoted up to give access to the inside; just remove a screw at the bottom and swing the side up. 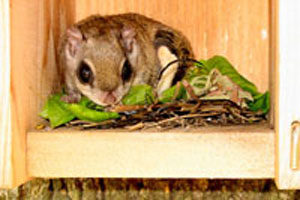 We had nearly finished the circuit when I opened the side of one that was filled to the top with nesting material, more than we’d ever seen. While we looked in at it, it moved. It produced a bulge near the top. Nesting material doesn’t usually move. I reached in to press it back into the birdhouse and a pair of big eyes in a gorgeous flat face peered out of the entrance hole. The little head practically filled the hole. It didn’t seem to be afraid of us; it just stared.

I had no idea what it was. I had never seen such a face before. I decided it could stay in the birdhouse, but as I reached up to replace and fasten the side, the little creature climbed out of the box, went around the tree and came into sight again just above our heads. Its bushy tail marked it as some kind of squirrel, but very small, only about nine inches from nose to tail-tip.

While it sat there we could see what seemed to be a seam running down its side from wrist to ankle, and I realized we had found a flying squirrel. The “seam” is the loose fold of skin that stretches out so the squirrel can glide from one tree to another.

Flying squirrels are rarely seen because they’re very nocturnal, unlike our gray squirrels who are busy all day. And we didn’t know that we had them in South Riding. Well, we do, and they’re beautiful.

Presently the squirrel went on up the tree, out of sight, and we moved to the next birdhouse to continue our cleaning. I opened it — and it was full of nuts. While we were staring surprised, something fluttered down between us that we thought was a leaf.

Then the flying squirrel came around this second tree and climbed in the front of the birdhouse to see what we were doing. We had found its food cache. What we’d thought was a leaf had been the squirrel sailing around us and landing on the back of the tree. Again, it was within arm’s reach and quite unafraid.

Having finished our housecleaning chores, we went inside to check the internet for information. We have here a southern flying squirrel. They’re small, nine or ten inches long, and don’t actually fly, of course, but they’re superb gliders. Using their tails as rudders when sailing from tree to tree, they make a quick turn just before landing so that they’re facing up the tree when they touch it. Then they scurry around to the back of the tree to elude any pursuing predator. We also found that it’s not unusual for them to use a birdhouse as a nest and a second, nearby birdhouse for food storage.

We’re delighted to be its hosts, and hope they continue to enjoy South Riding as much as we do.