Now that the eaglet (DG1) at Dulles Wetlands has made it through the first two weeks with all its rapid growth and development, there are many more changes that will happen.  An eaglet goes from 3 inches to 3 feet in three months.  It grows from a helpless hatchling to an adult-sized, juvenile Bald Eagle in just 12 weeks or so, showing very rapid growth and development along the way.  Here’s what the next two weeks hold in store. 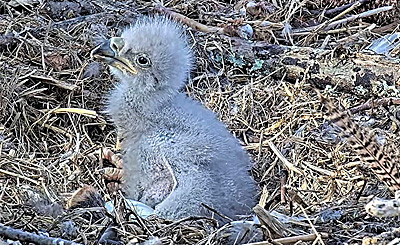