Under the leadership of Jane Yocom and Carol Sotili, a group of 12 nature enthusiasts who turned out for a recent guided walk of Dulles Greenway Wetlands were rewarded with 43 species of birds, including the Bald Eagle pair being documented via live camera. Under partly cloudy skies and temperatures that started below freezing, the walk’s highlights also included an uncommon American Tree Sparrow, an accidentally flushed Barred Owl, a soaring Cooper’s Hawk and American Wigeons in full breeding plumage. Other types of critters were in short supply, although the area’s mammals were duly represented by a cooperative Eastern Cottontail. 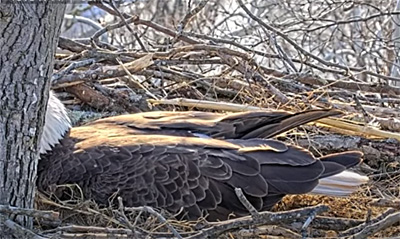