A Tale of Two Bird Walks 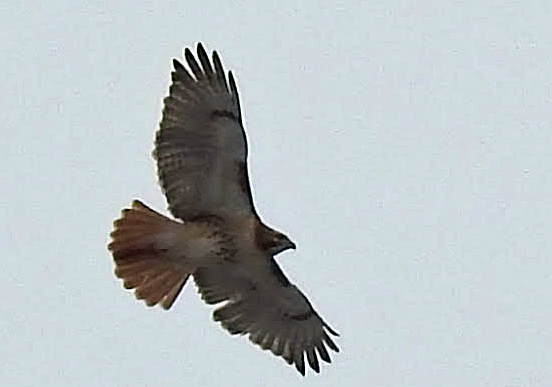 On January 29 and 30 participants in the bird walks each morning at the frozen-over Dulles Wetlands braved cold and ice to tease out a total of 42 species of birds.  On Saturday 22 species were found, despite the bitter cold and winds trailing Friday’s storm.  Still, it was a beautiful morning to be out, as the two hardy participants (led by Joe Coleman) were well-dressed for the weather and did spot the resident pair of Bald Eagles sitting in and next to their nest, as well as the weekend’s only Cooper’s Hawk.

Bird activity was much higher the next day, and the group led by Bruce Hill and Mike Scott was treated to calm and partly cloudy 20 degree weather.  Eight birders tallied 39 species of birds.  Highlights included several Hermit Thrushes, a lingering Eastern Phoebe, three red Fox Sparrows, and two species of Merganser diving on the partially frozen but still flowing Goose Creek.  Perhaps the most memorable bird was also one of the most common: a partially-albino White-throated Sparrow.  It’s totally white head and back stood out as it foraged with others of its kind in open patches of ground and popped into view several times as it moved from spot to spot.

While winter is not the season of greatest species abundance at the Dulles Wetlands, it was a great experience for all who made the trip.  A combined list of all the species seen on both walks is provided below: