Great Showing of Waterfowl during our Waterfowl Tour!

The trip started at Elizabeth Mills Riverfront Park on the Potomac, where we found Canada Geese, Mallards, Bufflehead, Common and Hooded Mergansers, and at least four Common Goldeneyes. 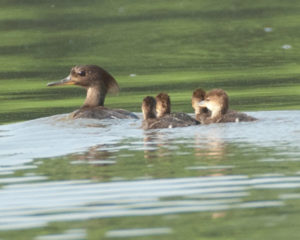 Our next stop was Alder Lake, a small water retention pond in residential Ashburn, where the highlight of the stop for many was the chance to watch and listen to the courtship display of three male Hooded Mergansers competing for the favor of a single female.

Our final stop was Algonkian Park, back on the Potomac, where we added American Wigeon and American Black Ducks to our day’s list, and got some good looks at Yellow-bellied Sapsuckers, Brown Creepers, and a Golden-crowned Kinglet  as a bonus.