A rabbit seeks shelter in a tangle of briars. The scatter of feathers below a tree reveals a place where a hawk had a meal. A pile of scat reveals the territory of a red fox and provides a clue to the nearby entrance to its den.

Winter is my favorite time to look for evidence of animals and their activities. If you know what to look for and where to look, the fields and forests and the clues within them can tell stories about the lives of the animals that live there. Developing an eye for nature observation involves knowing how to find the evidence or “sign” of animals, such as tracks, droppings (scat), rubbings on trees, scent markings, and other clues. Learning how to identify these signs and how to discover their meaning opens doors to a whole new world of animal behavior.

When going out in search of animal signs, a few things you may wish to bring along are a ruler for measuring scat or track size (or, even easier, a string with inches marked on it), a small notebook for field notes, and a good field guide to tracks. My favorite is the Stokes’ guide, Animal Tracking and Behavior. This informative book contains illustrations of scats and tracks and provides natural history on common mammals found throughout Eastern North America.  Stokes’ A Guide to Nature in Winter is another of my favorites. A nice pocket-sized guide is the Track Finder by Dorcas Miller. This is a small, simple guide that is particularly easy for children to use.

Animal footprints are always exciting to find. Look for tracks in freshly fallen snow, muddy shorelines, creek edges, and in shallow pools of water. Tracks can tell you what kind of animal had been around and, in some cases, what it was doing. A morning after a rain or snow is a great time to explore. 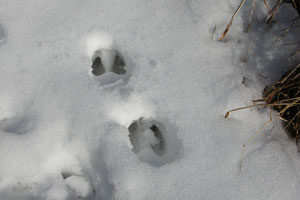 The tracks of the white-tailed deer are easy to identify. Deer are hoofed animals, and their tracks look like narrow, upside-down hearts, separated in half lengthwise. Deer tracks are left in long lines, and, because of their pointy, rather sharp hooves, the trail they leave is often distinct enough to follow for some distance.

Finding tracks that resemble dog or cat paw prints is not unusual. When you find a familiar paw print with a large heel pad and four toe pads, you can narrow it down to the dog or cat family right away. If you find a track that includes claw marks, you are looking at tracks from some member of the canine family (felines have retractable claws, which will not show up in a track).

Your next clue to which member of the family has left a track is the habitat you are in. If it is a very developed, urban setting, chances are you are looking at domestic dog prints. If you are in a more rural setting, you could be looking at fox prints, although there are feral (half-wild) dogs in the county. You’ll need more information to determine which animal left the tracks.

Fox tracks look like typical dog or cat prints. For this reason, fox tracks are often confused with those of cats or small dogs. However, a fox’s track is larger than a cat’s and smaller than a medium-sized dog’s. If you have a trail of tracks, that can help. Red foxes are known for their distinctive gait — they place one hind foot directly in the place where the opposite front foot was, a gait known as “perfect-stepping.” It results in a single line of tracks.

Smaller tracks could belong to other common animals found throughout the county: squirrels, rabbits, mice, and voles are active all winter. If you find tracks that look like tiny (1 ½ to 2 inches) handprints with long fingers, you may be looking at the tracks of the gray squirrel. Gray squirrels leave tiny handprint-like impressions with their front feet and larger, longer prints with their back feet.

Rabbit tracks appear as two tiny front paw prints with two larger rear prints in front. Rabbits tend to “gallop” with the rear feet landing in front of the front feet as the animal moves. Mice and voles leave tiny, light tracks that look like miniature cat or dog prints. Voles have visible claws, however, and mice do not.

But what if the track you are checking out is not very clear? Or what if the habitat you are in could be inhabited by any of the animals mentioned here? You need other clues to find out more about the animal you are tracking, such as food leavings, scent marks, trampled vegetation, and droppings (scat).

Next to tracks, scat is perhaps the easiest way to learn who your animal neighbors are. Each species leaves behind a distinct type of scat, containing remains of what they have recently eaten. This can be a terrific way to learn about food preferences, as well as relative abundance of species.

Deer scat is somewhat easy to identify, appearing as small “bullet-shaped” pellets often found in small piles or compressed clumps. It can be found anywhere white-tailed deer can be found: meadows, fields, forest edges, and woodlands. Deer scat is sometimes mistaken for the scat of the eastern cottontail rabbit, which leaves small piles of flattened spheres. The eastern cottontail usually leaves fewer pellets, which are never compressed like those of the deer may be. Since both of these animals forage on a variety of vegetation, their scat will contain bits of plant matter and fibers.

Foxes leave droppings that appear like those of a dog. Fox scat is generally 3-4 inches long with pointed ends, but it is generally smaller in diameter than dog droppings and will contain recognizable bits of fur, hair, and sometimes seeds.

Foxes are omnivores (consumers of both plants and animals), so there will be variation in the contents of their scat. In winter, foxes generally eat small mammals, but in summer and fall, their scat will contain more seeds and berry skins. Their scat is often left in very obvious places, such as the middle of hiking trails, near den entrances, or other prominent locations.

Raccoon scat looks a lot like fox’s, except the scat will have blunt ends rather than pointed ends. The scat will also contain a variety of matter, including plant material, bones and fur, and will also be left in prominent locations, such as at the base of trees, serving as advertisement to other raccoons that “someone’s been here.” The best diagnostic is the blunt ends.

Remember when looking at scat, never, never pick it up or touch it. Animal scat contains a variety of parasites (some of which may even be inhaled) which can cause serious health problems. Study the scat from a distance of at least three feet. Use a stick to examine it, and do not stand directly over it.

Even if you have trouble finding scat or tracks, there are other clues to animal behavior that can be found in many habitats in Loudoun County. Nests, scraped ground, and food remains will tell you something about our wild neighbors, so take time to look for the somewhat less obvious clues to animals’ presence.

In the tall grasses of hayfields and meadows, you may find patches of matted-down grasses, indicating an area where a group of deer has spent the night, sheltered from the wind.

Close to the ground, among the grasses, you may find small nests filled with fibers and fur, possibly belonging to meadow voles or a cottontail rabbit. The leafless trees reveal many nests, abandoned by birds that do not use them in the winter months, or squirrel nests — leafy, “messy” clumps found in tall trees.

Large, bare patches on the ground, places where the leaves and vegetation have been scraped away, could be evidence of a male deer scent-marking the ground with urine. Smaller scrapes could be the work of wild turkeys exposing the forest floor in search of food, such as acorns and other seeds. If small piles of dirt surround an area, it could be a place where an animal such as a gray squirrel was digging up a nut.

A close look at the ends of low-growing branches may reveal that a rabbit has been eating, as the ends will be nicked off sharply. Deer also relish fresh growth and will nip bids just as they are appearing in the spring. Deer, however, lack front teeth on their upper jaw and will thus shred the ends of twigs as they eat.

You may notice narrow trails of worn-down vegetation, trails weaving through forest and field. These are deer trails, and once you develop the knack for seeing them, they are easy to identify. Deer will use the same routes over and over as they travel through their home ranges, eventually wearing away narrow paths or “deer runways.” Other animals use them too, and if you follow one after a fresh snowfall or rain, you will find a variety of tracks and other animal signs nearby.

You might find evidence of a recent meal, such as a pile of bird feathers under a tree branch. Chances are a hawk, a fox, or even an owl ate a small songbird here. Many animals eat songbirds; however, hawks most often pluck the feathers one by one before eating, and foxes pull the feathers out in chunks before eating.

You might find a grayish, hairy-looking clump known as an “owl pellet” under a tree. Owls cannot digest the bones and fur of the small rodents or birds on which they prey and will “cough up” a pellet shortly after eating. This pellet can be soaked in water, and the bones separated out to determine what the  owl ate. Owls often feed and roost in the same location, so if you find an owl pellet, look up into the tree, and you may spot the owl perching there above you.

Other animals, like the chipmunk, gray squirrel and the flying squirrel, will leave piles of nutshells behind after they finish eating. Grey squirrels eat from prominent perches, such as logs, or in more urban settings, from fence posts or even picnic tables.

If you find a small pile of nutshells in one of these locations, you have found a squirrel’s leftovers. Chipmunks and flying squirrels are not so quick to advertise their presence, so it may take a bit of searching on the ground to find their food remains. Look at the edges of the nutshells for their tiny tooth marks.

While it is always fun to see wild animals in person, more often than not you can be rewarded immediately by looking for the evidence of wild animals’ activities and habits. There are signs of animals everywhere, and once you develop the habit of looking and uncovering the clues, you are in for a real treat.

I highly recommend the books mentioned above or any of the other field guides to animal tracking that are available. They all contain fine illustrations, natural history information on local wildlife, and helpful tips on animal tracking and observation.

Stokes, Donald and Lillian, A Guide to Nature in Winter, Little Brown and Co., 1976